Growing Up in Transit
By Danau Tanu 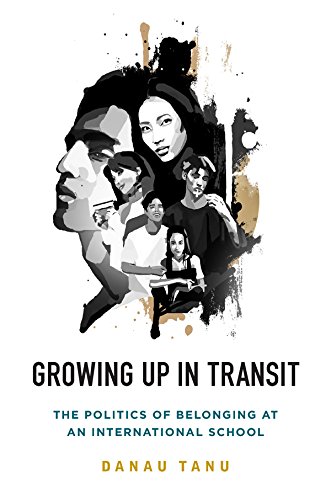 Global citizenship is in bed with colorblind racism. If you’ve lived online this COVID summer (or winter, if you’re down under), as most of us have, and if you’ve followed the social media hashtags #intELOC or #decoloniseib, you may have heard some version of that statement by now. But how does colorblind racism playout in international schools, exactly? Besides, why is it racist to claim to not see color?

Let’s break it down.


This is the first in a series of articles that I will write to detail how structural racism works in the international school setting. I will mainly draw on the doctoral research that I conducted on this topic.

Some years ago, at 30-something, I went back to high school for a full year to collect data via participant observation and in-depth interviews. I chose an international school in Indonesia that boasts of having a wide range of nationalities represented among students and staff. Overt racism is not condoned. If a student ever says anything racist, their classmates would call them out before the teachers could. It seemed like a picture-perfect international school.

Yet, students learn to internalise cultural hierarchies, meaning that student perceptions of popularity are sometimes colored by race.

“So, who are the popular kids?” I asked a couple of seniors.

“Well, popularity isn't such a big deal here, but I suppose the white kids that like to sit over there are considered popular,” Melinda answered as she pointed at the benches near the high school office.

“The white kids?” I repeated suspiciously, as I was sure they were not all “white.”

I leaned over to do a double take on the group she was referring to. Many of them were Caucasian but there were also two who were Black, one who was South Asian, and at least three were of mixed Caucasian and Asian descent. Melinda did not notice the irony in her choice of words.

On another occasion, a couple of students from the group referred to as the “white kids” helped some Korean students set up a tent for an event. All were male. One of their friends came over and said, “Hey, the white kids are helping the Korean kids!” There was a pause as we all tried to digest that statement. One of the “white kids” broke the silence: “Dude, I'm Pakistani.” The other “white kid” added, as he held on to the tent he was working on, “Yeah and I'm Asian. My mom is Chinese… and you're half Japanese.” It was only then that the student realized the inaccuracy of his statement.

What these kids understand is that whiteness is not always about skin color. It can also be about looking and sounding as though you have been raised in a white-dominant society. The student cliques perceived to be popular often have more Caucasian students than other groups. But they also have non-Caucasian members, who are usually highly westernized native speakers of English. The way they sit, walk, talk, move, dress and wear makeup all betray the western influences in their lives. As a result of their shared culture, they are often perceived to be “white” and popular, both among themselves and by others.

The school administration affirms the dominant position of students socialized in Anglophone culture in subtle and not so subtle ways. The curriculum focuses on the West, with a particular emphasis on the U.S. and the U.K. For the sports on offer as extracurricular activities, for example, much more attention is paid to sports like rugby and softball than to sports popular among the Asian students, who make up a majority of the school population, such as badminton or martial arts.

A shared culture also makes it easier for students from western countries to build rapport with the mostly white, Anglophone teachers and administrators. Japanese students are generally silent in the regular classes taught by teachers from Anglophone countries, but become vocal and participative once they are in a class with a Japanese teacher. An Indonesian teacher also commented that her Indonesian students were more relaxed in her class.

Just as native English speakers are perceived as white regardless of how they look, Indonesian-speaking students at the school—a group that includes Indonesian nationals of different ethnic backgrounds, including those of Chinese, Indian, and Arab descent, and students of mixed heritage, as well as Koreans, Taiwanese, Filipinos and a Palestinian, among others—are perceived as being homogeneously Indonesian. Some of these students don’t even speak much Indonesian.

One of them, Andrew, has an Indonesian mother. His father comes from the United Kingdom, but Andrew considers himself more Indonesian than British.

“Here in Indonesia, I can make conversation with anyone I see. From Bali to wherever I go, upper class to lower class, even pedicab drivers and beggars,” he said, gesturing with his hand as he spoke. “But then when I go to England, it's a different story. I don't really know what to talk about.” Speaking of the “white” students, he says, “When I hang out with them, I just don't feel that connection.”

For the most part, the “Indonesian” students like Andrew get along well with foreign students. But they sometimes choose to describe their relationship with “white” students in nationalistic, anti-colonialist terms. He described the “white” students as “arrogant,” asserting that “They walk around like they own the place. So we put them in their place.”

As Andrew's comments suggest, the dominant position occupied by the popular “white” group doesn't go unchallenged. Indonesian students are generally from privileged backgrounds and don't shy from using their financial resources to vie for the top place in the school’s social hierarchy—something that drew the ire of other students and teachers. Indonesian students counter the advantages enjoyed by foreign students by making a show of their wealth, for example, chipping in together to hire a posh Jakarta club (and some bodyguards) for a party. One student revealed that the actual cost of these kinds of functions is less than the other students think. But they leave others second guessing the cost in order to play up their financial capacity.

Teachers and administrators, as well as other students, like to point out that the “Indonesians” tend not to mix, something that has a bearing on their standing in the eyes of staff, for whom the ideal student is the “global citizen.” Indonesians add to the school's overall sense of diversity by their presence but fall short on being “international” due to their failure to assimilate into the school culture. By contrast, English-speaking groups are perceived by staff to be the most international because of the mix of race—in the colonial sense of the word, that is—represented in those groups.

Both the “Indonesian” and “white” groups are equally heterogeneous. But the labels they attract, for example, as “white,” “Indonesian,” or “international” depend on who is calling the shots. And although westernized, English-speaking students may be referred to as “white” by the students when speaking of status, the fact that they share a sense of familiarity with western culture becomes invisible to the teachers when internationalism is at stake.

Danau Tanu, PhD, is an anthropologist and the author of Growing Up in Transit: The Politics of Belonging at an International School, the first book on structural racism in international schools. Available now in hardback and eBook. The paperback edition will be available in December 2020; see www.danautanu.com for a 25% pre-order discount code. Portions of this article first appeared in Inside Indonesia.