The Value of Restorative Practices 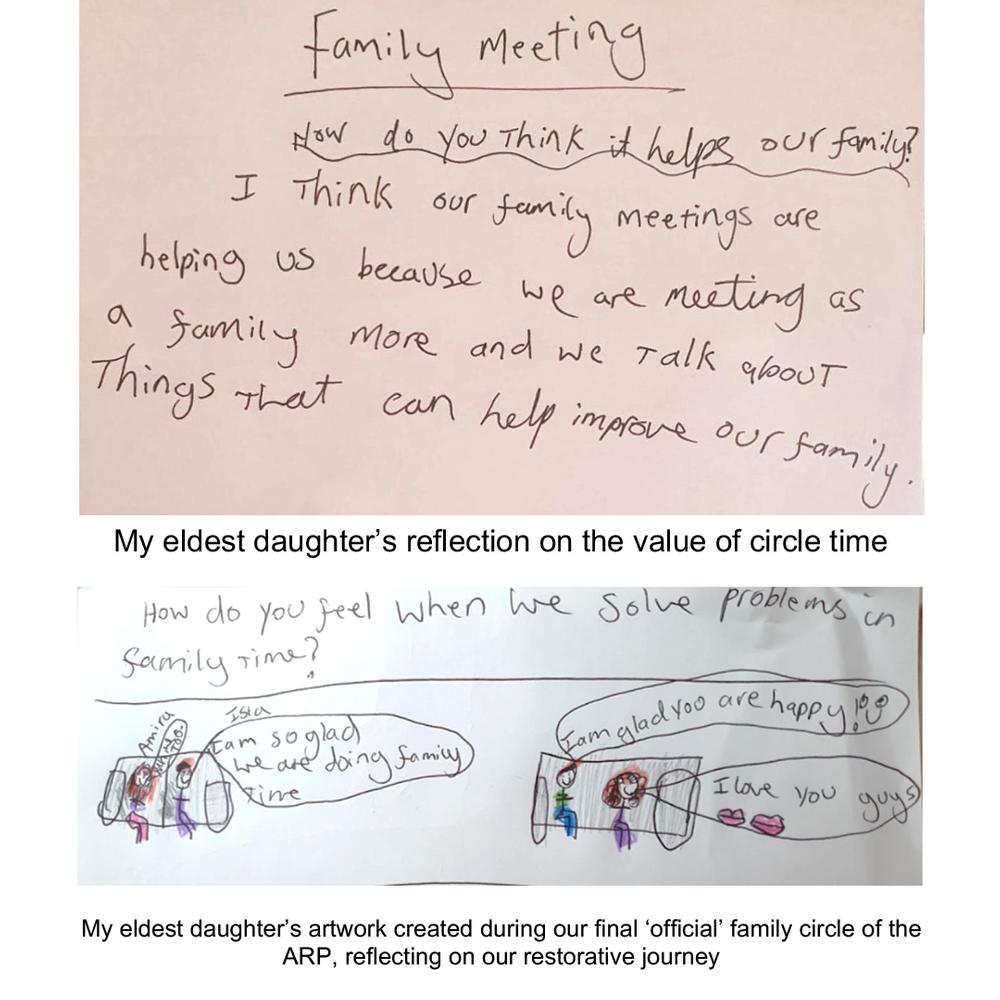 This article is the final part of a three-part series. It has been adapted from the formal Action Research Project (ARP) which was submitted to the International Institute for Restorative Practices graduate school.   In part one and part two of this  series, Alistair explained that as part of his graduate programme, he opted to undertake an ARP examining the efficacy of restorative practices in international schools.  However, when Covid-19 hit, his own family underwent a perfect storm of challenges as they accepted new international teaching jobs, moved house, country and continent - with a young family - in the midst of a global pandemic.  Alistair explores the role restorative practices can play in both personal and professional contexts.

As I reflected on the copious evidence gathered from both daughters over the course of this action research project, it became abundantly clear that they have had a very positive experience with restorative practices (RP), even at the earliest stages, and wished it to continue:  “Family time has helped us...we have got together more and discussed our problems...this helps us stop arguing”.   As I reviewed all of my evidence collected there was no negative feedback from my children.  It was a consistent theme from the evidence I was collecting that they valued the RP approaches I had been using and that our family relationships were improving as a direct result.

Both of my daughters showed a clear understanding of the Compass of Shame (described in Part Two: Taking Restorative Action).  On one occasion, shortly after we had been discussing the Compass of Shame as a family, my wife and I had an argument.  Upon overhearing the argument, my youngest daughter approached her mum and said:  “Mummy, sometimes our emotions make us do things that we shouldn’t do, this is why we always need to be careful not to act on our emotions”.  This confirmed to me that even my youngest daughter could understand the basic concepts of RP and was able to draw from them in making sense of behaviours.

At the end of the project, I concluded with both a follow up survey, and I also conducted a circle time activity where we all generated an art piece that reflected how we feel about the use of RP in our family.  Again, from the perspective of my two daughters, the follow up survey responses very much confirmed the efficacy of RP in their lives.  My eldest daughter, when responding to the question ‘what should we keep doing?’ stated that we should “Keep having family meetings...we should keep doing circle time because it is making our life healthier and helps us to fix our family problems”.  In responding to the same question, my younger daughter stated that “I want to continue to do circle time because it is making our family better”.  Not only was this incredibly reassuring, it was also deeply moving that they had felt such a positive impact from embracing the methods of restorative practices.

Creating art together was a deeply bonding family experience.  It was a Professional Learning Community I was part of that inspired the idea, which I used for our final ‘official’ family circle. My eldest daughter chose to create a work of art demonstrating a positive family experience that states “I’m so glad we are doing family time” with smiles and other statements showing positive affect. Through this medium I was able to gain a beautiful insight into the impact that RP had had on our family life.

How is this relevant for international schools?

It seems that so much of the emerging RP literature is focused on addressing teachers and social workers, which is valid, but the missing link I would argue, is training parents how to use RP effectively, especially parents in the international sector who are experiencing major transition.

I found myself agreeing with Antonio Morales from QSI International School in China, who wrote in the Journal of International Education Research that international schools can ‘do more’ when it comes to transition programmes. As is the case with much of the existing literature on this topic, Morales identifies the need for international schools to better understand the challenges faced by children and families in transition, which I would agree with.  However, the key limitation here is that the ‘more’ is limited to the context of what the school itself needs to do, but neglects to empower parents and give insight into what they themselves may be able to do in this process.  Transition programmes focus largely on training staff to deal with students, rather than on training families and parents, which leads to a disconnect with regards to equipping parents to deal with their own children in times of major transition.  So by implication, there is a greater need for international schools to include parents in the RP training programmes to fully prepare them not just for transitions, but also for proactively maintaining healthy relationships that adopts the same methods that RP promoting schools utilise.  This would be a truly restorative and community building approach.

From my own experience, many international schools have a shared ‘international culture’ and this often comes with positive approaches to discipline which are very much aligned with RP (although they often do not have the language to identify as such).  I believe there is great potential for the development of restorative practices in international schools, both in the everyday discipline procedures and also in the transition programmes.  It is often assumed that parents are equipped with the strategies to deal with their children through times of major change, but in reality this is not the case.  From the school’s perspective, more can be done to involve parents in the RP training process, as these methods should be aligned with teachers and with families.  For international schools, transition programmes should integrate the use of RP both at the school level and also at the family level.

For schools that have transition programmes, my main recommendation would be to involve the parents in this training in order to build a greater sense of community and bridge the gaps between school and home.  It seems that so much of the RP literature is still focused on the ‘reactive’ aspect of RP and more studies need to be done to promote the efficacy of the ‘proactive’ with regards to both school and home life.

In this era of global pandemic and lockdown, it is clearer than ever before that all humans are hardwired to connect and we all need meaningful relationships in order to thrive.  RP may be a young and emerging social science, but the evidence is growing for the efficacy of its approach both in the Education field and also in family contexts.  My action research project was personal, deeply meaningful, and it has strengthened my belief in the value of adopting restorative methodologies in both my personal life and professional practice.  For all of the frustrations that Covid-19 has brought, conducting this action research project has so far been my highlight of 2021.  The result has been genuinely happier and healthier family relationships and a deeper appreciation of the impact of the restorative approach.