Seeing Yourself as a Leader
By Kim Cofino
18-Jan-23 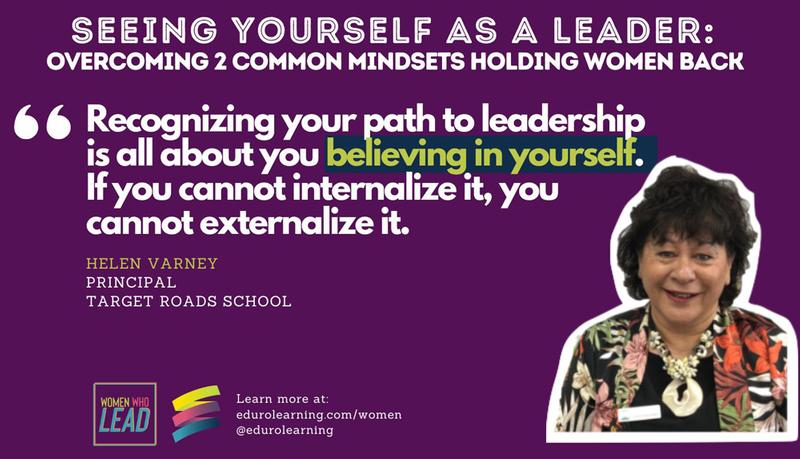 As noted in both Lean In (2013) and The Confidence Code (2014), women are less likely to apply for positions until they meet 100 percent of the qualifications whereas men will apply when they meet only 60 percent (based on data from a Hewlett Packard internal report and backed up by LinkedIn statistics). This mindset presents an unnecessary hurdle when making the move towards leadership because, as the Harvard Business Review reported (Mohr, 2014), it’s not actually a lack of qualifications or confidence that holds women back, it’s the fact that often the list of requirements for the position are unrealistic.

Coupled with a fear of public failure, it can be easy to see why women internally hold themselves back from applying for jobs they’re not 100 percent sure they can get. Both of these internal perceptions came up in the Women Who Lead interviews as being key factors in why the path to leaders can be so challenging for women. In addition to the external perceptions of what leadership looks like, which I addressed in a previous article, it can be easy for women to put the next step in their career mentally on hold for far too long.

In today’s article, I’m highlighting some of the mindset challenges that held the Women Who Lead back from applying for that next position, along with some concrete advice for how you can begin to shift your internal beliefs and self-talk to pursue the next position.

1: I’m not ready for leadership. I need more qualifications.

It’s well documented that women will not apply for positions until they can “tick all the boxes.” Not only is this often an unnecessary hurdle but their male competitors do not hold this same philosophy. In the end, by not applying, you’re often actually conducting your own self-sabotage, stopping yourself from getting the experience of interviewing, from demonstrating your interest in a leadership position, and potentially succeeding in the process.

Rachel Caldwell, the director of PSI in Ukraine talks about this feeling of self-doubt and inadequacy throughout her leadership career. Particularly “when looking at job descriptions, if she couldn't take every single box, she wouldn't apply. Even though she saw her male counterparts who were less qualified than her applying for those very same positions and succeeding.” Bin Lee, the deputy head of school at Chinese International School in Hong Kong had a very similar experience to Rachel. When a leadership position was advertised, she was encouraged to apply, but “she hesitated, until the very last minute,” because she didn't have the self-confidence to believe that she could do it.

Then, you can decide if you might want to earn additional qualifications. Not everyone who steps into a leadership role has had the perfect checklist of every single qualification ticked off. Erin Robinson talks about “cultivating your champions,” and that “not only is it valuable to find a mentor to guide you through your leadership journey, but also finding a champion who will speak up on your behalf when you're recruiting for leadership positions, who will speak out about your work to other leaders, someone in a position of power who can support you in your professional growth by advocating for you and your potential.”

The idea of applying for a leadership position and not getting it can be enough to hold women back from applying. The realization that you can be seen applying for a position, and the vulnerability that comes from having visible leadership aspirations, presents the risk of visible failure.

Fiona Reynolds, then deputy head of school at the American School of Bombay in India, points out that women are more socialized to want to please and do well and by trying to do something you’ve not done before, you can worry that you might not be good at it, and that can be harder for women to risk.

In her own career, Fiona experienced bouts of imposter syndrome too. When she first stepped into the deputy head role, she felt like she was “faking it, but she wasn't sure if she was making it.” And when she had the opportunity to step into the acting head of school role, she actually got so stressed that she became physically ill. She got so worried that she couldn't do the job that it affected her physically.

Helen Varney, then principal at Target Roads School in New Zealand, reflects on mindset changes over her career. She says at the start “we don’t actually believe in ourselves, because we have this role we think we should be in. That role is determined by our journey through life. It’s not until you get someone else in your life that suddenly makes you think, there is more to this than I had thought. It’s all about you believing in yourself. If you cannot internalize it, you cannot externalize it.”

Elsa Donohue, head of school at Vientiane International School in Laos talked about having “moments of self doubt, navigating the differences of communication styles.” When working with other leaders who are more traditional, she learned that she needs to “lean into her own unique competency, to feel confident, to be able to find that point of equilibrium in her practice, where she felt she could advocate for herself and feel competent in her unique leadership style.”

Instead of thinking of failure as a loss, try framing it as a “first attempt in learning.” We don't usually get the first position we apply for. But we learn; we learn what works and what doesn't, and where we have room to grow.  If we're always feeling comfortable, then we're never growing. There's a reason they call it the comfort zone.

So yes, you might fail. But if you do, you're showing people you want to be a leader, that you're willing to take risks, that you have something you believe in, and that you stand for that. You want to make a bigger impact in your school setting, and you're going to go for it. When you apply for a leadership position, you're also letting the admin team know that you're interested in leadership, and now they can support you in taking that next step in your career. Remember, your school leaders can't read your mind. They don't know you're ready for leadership unless you let them know and you give it a try.

When you’re questioning yourself, and not sure you should take the next risk, Kathleen Naglee, head of school at International School Helsinki in Finland says, “If you’re asking the question, follow your gut instinct. If you see how you can impact the lives of students, take the opportunity and apply.” You will learn through the experience of applying, even if you don’t get the job.

When you start having those thoughts about stepping into a leadership position, you may need to take action yourself. In many of the Women Who Lead stories, they mentioned being asked to apply for positions but that doesn’t happen to everyone. Caroline Brokvam, then director of the American School of Antananarivo in Madagascar highlights that “not everyone gets tapped on the shoulder, so you could be waiting for that nudge, waiting for that tap, and it might never come.” You may need to actively start putting yourself out there to show your intention to lead.

When you get invited to those leadership interviews, Emily Sergeant Beasley, then head of campus at Shanghai American School Pudong campus in China reminds women to believe that they “were invited to interview for a reason.” When you're in that interview, be true to who you are, and don't worry about who's sitting next to you.

If you’re reading this article and wondering if leadership is the next step for you, think about the ways that you believe you can have an impact on your school community, and start articulating your vision. Seeing yourself as a leader is the first step in actually becoming one. If you need help recognizing your leadership potential, you’ll find support, community, and many more examples inside Women Who Lead https://edurolearning.com/women. Join us for the next global cohort and take the next step towards leadership!

Out With the Old Medical Models, In With a New Ecological Response
By Dr. Virginia Rojas Jan 2023