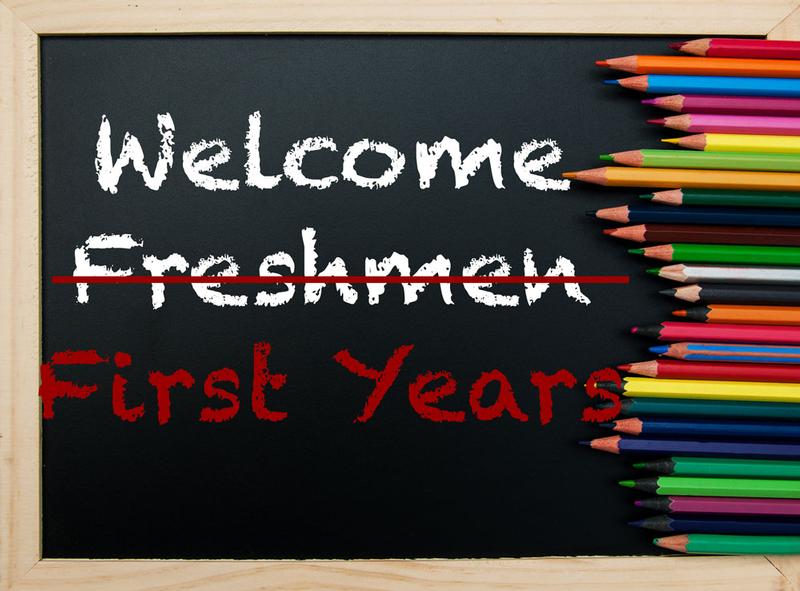 BusinessMAN, freshMAN, upperclassMAN. Words matter. They’re how we communicate, understand, and feel when interacting with each other. When we use words such as businessman or freshman, we become complicit in making everyone other than men invisible. Hidden. Unseen.

Countless studies have established that gendered terms can hurt self-confidence and reinforce unconscious bias. These terms can communicate that being a “man” is the standard and everything else is outside the norm. Research1 conducted by the World Bank identified the grammatical gender structure of over 4,000 languages, accounting for 99% of the world’s population. It found that gendered language, i.e., language which identifies objects as masculine or feminine (or sometimes neutral), is spoken by 38% of the world population. Even more revealing was the association of gendered languages with low female labor force participation rates and regressive gender norms. The United Nations (UN)2 recognizes the role language plays in shaping social and cultural attitudes and the use of gender-neutral language as a powerful way to promote gender equality and eradicate gender bias. It is, therefore, clear that it’s not just semantics. Words matter.

My first tryst with a gendered term was the use of “Freshman” to refer to Grade 9 students. The term never quite sat right with me. To check if I was overreacting, I asked my twin brother, “How would you like to be called a Freshwoman?”. His response was laughter followed by a look of disgust. That was enough of a trigger for me to challenge the tradition, mindset, and status quo. I decided to do something about this, starting with my own school, Singapore American School (SAS). Armed with research from the UN and precedents of prestigious institutions such as Cornell, Yale, Columbia, and Dartmouth, which had already made a change, I approached the school leadership to replace this term with a gender-neutral alternative (such as first year student). The school leadership kindly agreed! During this process, I realized that the issue was far broader than just my school. American schools around the world, for example, continue to use this term. I understood the meaning of responsibility. How could I stop at just making the change at my school when so many mindsets remained unchanged?

I contacted all international schools around the world that are assisted by the United States Department of State (around 200 schools). Scouring thousands of websites, I am also in process of contacting around 1,000 independent schools in the US. The request is for these schools to consider the SAS example and replace the term "Freshman" with a gender-neutral alternative. I never expected the journey to be easy and knew things would not always go my way. Maybe only a few schools would convert, but I still had to go out and try because, in the end, I had to know that I was there, catalyzing change.

The response so far has been truly gratifying. As a result of the outreach, one school in Africa has already agreed to replace the term, while three others are actively reviewing its continued use. Many schools are reviewing their broader diversity, equity, and inclusion (DEI) practices, while countless more have encouraged the initiative. While I had not expected it, this journey has been fulfilling in completely unexpected ways. Students from schools as far apart as Ivory Coast and Bangladesh have reached out for guidance on their DEI initiatives.

Changing the term “Freshman” was never a battle of semantics but one of changing mindsets. The advocacy journey has made me alert to subtle biases which, though ubiquitous, seem hidden in plain sight. Questions abound. Why does a game of chess end only when the King dies even though the Queen is more versatile? Why does a deck of cards give more points to a King? Why are larger beds called King size and business leaders designated Chairman? When gender equality and breaking the glass ceiling are at the forefront of society, why are we holding on to outdated gendered terms and norms?

While I have made a start with “Freshman,” it is clearly just a single step in a long journey. Much more remains to be done.

--------------------------------------------------------------------------------
Suhana is a 12th grade student at the Singapore American School. Born to parents from two Indian communities and having been born and brought up in different parts of India (Banglore in the South and Delhi in the North) before moving to Singapore, she has experienced and embraced cultural and regional diversity since childhood. She believes in values of empathy and dignity and is passionate about contributing to the cause of gender equality, more specifically gender-neutral language. She is also an author of “Metanoia: A Teenager's Diary: The journey of changing one's heart, self, or way of life,” a diary that captures a myriad of teenage emotions. The book is available on Amazon.