“If You Have a Problem, You Are the Problem”: A Day in the Life of an International School Student 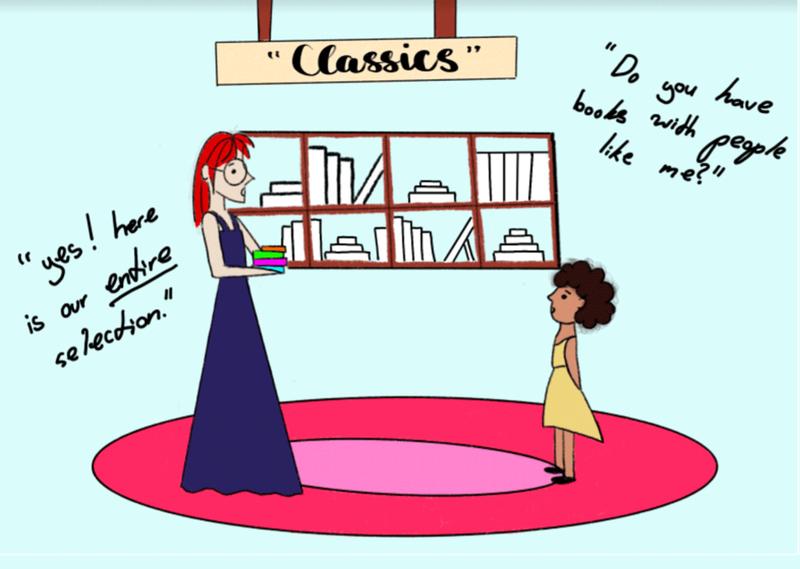 7:45 AM – A few years ago, I ran into one of my ninth-grade students on the way to work. We glanced at and greeted each other upon entering the bus and took our seats. My student was wearing a hijab. She is Black and Muslim. A few minutes later, the bus stopped at an intersection. While this may have been a physical intersection, to me it became a bitter reminder of the prejudice experienced by some of our students and is forever pinned in my memory. We both peered through our windows to witness a far-right-wing political billboard. One didn’t need to speak German to understand the divisive nature of this political campaign. The billboard portrayed multiple Muslim women in black burqas facing a stereotypical depiction of a Muslim man as a terrorist, while the rest of the billboard displayed a jolly white Austrian politician accompanied by a girl and proudly pointing at the St. Stephen’s Cathedral. The negotiated meaning suggests that unless one votes for this right-wing political organization, Austria will be radicalized by Muslims. Considering Austrian history, one would assume that such provocations at the expense of the minority population wouldn’t occur here.

At that moment, I considered my student’s intersectionality of being black, female, and Muslim, and the billboard signaling her “otherness” in the society she lives in as an expat. The school day hadn’t even started and yet there was so much to absorb and unpack for this student. As an educator sitting behind the student at this forsaken intersection, I wondered what type of identities we were cultivating in an international school setting.  It was around 1968 when Philip Jackson wrote Life in the Classrooms and coined the term “ hidden curriculum,” signaling attitudes and notions exhibited in the classroom where students spend much of their time.  But what happens outside of an international school environment may say more about why things unfold in the classroom the way they do.

While the far-right-wing national campaign failed in Vienna, one can’t help but think about a typical school day for this young girl. In an international school environment, where the representation of diverse staff is often lacking (as highlighted in the article Racism in Recruiting: The Elephant in Our International Education Room), how do I equip my students with skills to overcome these “ills?” International schools pride themselves on promoting intercultural understanding. Anyone who has taught in an International Baccalaureate (IB) classroom is aware that IB’s mission revolves around being “internationally minded,” a term that serves as a pillar for the IB program. I hope that my student wouldn’t feel a sense of “otherness” here.

12:20 PM – My student has entered the class where I will teach a double lesson on Golding’s The Lord of the Flies. It’s a novel that deals with the dark side of human nature. Why would I be teaching a novel that I dislike and that does not resonate with my students? Because modifying the curriculum to accommodate all our students requires a willingness to unpack our own biases. And whilst I am fortunate to work in a department where educators are willing to listen, reflect, and modify the curriculum, all international schools must create a conducive environment for discussions on matters of inclusion. One of the best methods to examine inclusion in any school is to take a close look at that school’s English department booklist. It’s telling. The reality is that discourse in literature and even higher education has been that a book like The Lord of the Flies is considered a “classic.” A classic, whose literary lines project biases onto our diverse student body:

“Which is better – to be a pack of painted n*(word) like you are or to be sensible like Ralph is?” (Lord of the Flies)

“We’ve got to have rules and obey them, after all, we’re not savages.  We’re English, and the English are best at everything.” (Lord of the Flies)

If you read that last quotation in a classroom, what do you say to your students that are not English? In Why Are Books on the English School Curriculum Still in the Grip of Straight, White Men?, Jeffrey Boakye reflects on the need for diversity in literature. Not pausing and saying anything plays into the hidden curriculum, meaning that, by lack of intervention on the teacher’s part, the teacher is an accomplice in promoting a flawed ideology. The teacher is ultimately promoting dominant attitudes in the classroom to a diverse student body. On a global scale, in the context of war and conflict, which I had to confront as a child, people die because of indifference. Elie Wiesel said it best, “We must take sides. Neutrality helps the oppressor, never the victim. Silence encourages the tormentor, never the tormented.” And, if anything, what better text to teach the evil side and savagery of human nature than Wiesel’s Night?

Now, in many ways, we as educators fail our students when we are unwilling to acknowledge that students are expected to conform to dominant political discourse and ideology, whatever “dominant” may be in their cultural setting. I use the word “conform” simply because “to belong” signals the need to be a part of a group or community. I have a problem with the word “belong.” Wanting to belong to a community that doesn’t welcome you has the potential to ritualize internal struggle. It has the potential to dismiss one’s struggle at the expense of the dominant power structure. Many schools promote the concept of belonging, suggesting that schools employ intentional systems of inclusion. However, it often becomes a system designed to merely project the illusion of belonging without putting in the hard work to create a culture in which all groups feel a genuine sense of belonging.

The reality was that between 8:30 AM and my 12:20 PM English class, whilst still dealing with the implication of that billboard, the student was confronted by elements of the so-called “hidden curriculum.” The educational theorist, Michael Apple, identifies the hidden curriculum as a “tacit teaching to students of norms, values, and dispositions that goes on simply by their living in and coping with the institutional expectations and routines of schools day in and day out for a number of years.” It’s in the school where students are taught to obey authority, where certain norms ought to be just “understood.” But how and to what extent do these norms impact our under-represented student population? That morning, my student had been taught to obey through this hidden curriculum by asking for permission to go to the bathroom, not making too much noise in the classroom, and perhaps being scolded if an assignment was handed in late.

The brutal reality for many international school students and diverse educators is that if they even remotely raise their voices about their concerns, they are confronted with the stance of “if you have a problem, you are the problem.” I have discovered through various interviews with international educators who identify themselves as Asian, Black, Muslim, and non-English native speakers, that there seems to be a prevailing fear of voicing one’s opinion due to the fact that one can be perceived as a “troublemaker.” The challenge seems to be that invitation to make positive change is received as either a personal criticism or as an existential threat.

Where do we go from here?

Well, once we truly listen to our students' voices, we learn their eagerness to be represented in the literature we teach them. We must actively give a platform to students to voice their opinion through surveys and discussions, and school clubs that empower them and give them a sense of worth. International schools must recognize and acknowledge our failures while working on diversity and inclusion. For example, at the Vienna International School, educators recognize the need for and encourage students to join the Anti-Racist, Gender Sexuality Alliance (GSA), and Social Justice club, among others. The work of the students and teachers in the Anti-Racism Club has been integral to updating and modifying the pastoral program, and students have used this opportunity to plan and deliver lessons to younger students. Real-time responses and feedback from their peers and homeroom teachers have driven this initiative. The Social Justice Club and GSA have utilized a range of practitioners, educators, and guest speakers, to work with both students and staff, throughout the year, with a specific focus on PRIDE month.

A portion of our budget is dedicated to book clubs for teachers that promote anti-racist and culturally competent literature. The staff book club has seen colleagues collaborate from across primary, secondary, leadership, and administrative teams. Cultural competency exercises from the readings have been utilized in the whole school training. As a result, our educators have been inspired to modify student-teacher discourse, resources, and teaching practices.  However, to have effective long-term impacts on changing the school culture, there is a need to move away from voluntary work and embed DEIJ into all elements of school life.

Recently, our academic institution had a DEIJ facilitator, Sherri Spelic, conduct a workshop on dominant cultures and this allowed us to reflect on our interactions with students. All of this is unfolding thanks to selfless educators who are making those grassroots efforts to ensure that all student voices are heard.  Mandatory involvement from all stakeholders is required, especially school leadership. We try to reflect and learn. I say try because we are still sailing on this journey but now, we have a direction and purpose. A powerful trait of school leadership means welcoming critical, harsh, and at times, raw and vocal feedback. It is only then that change occurs. This is crucial because it can shift an institution’s notion of being “an international house” to becoming an “inclusive home for all.”  It is only then, that the discourse changes to “if you have a problem, we all have a problem.”

Dzenana Kurtovic Ceman is an IB educator at the Vienna International School. She is a Ph.D. Candidate at the University of Vienna focusing on National-Cultural Construction of Curriculum under the supervision of Dr. Daniel Tröhler. Together, with a fellow educator, Bobby Kelly, she serves as CEESA-DEIJ representative for Vienna International School.

Reflecting on the Tenacity and Tensions of Transformation
By Joel Llaban Jr. Jul 2022