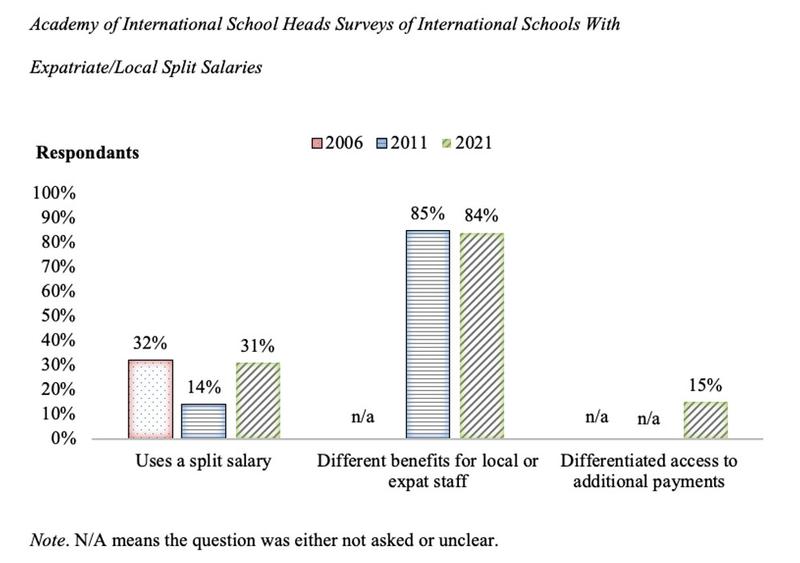 Since the term expatriate has different meanings and connotations around the world, for purposes of this article and research, the definitions intended are as follows: Expatriate: Employees who have transferred or self-initiated a move from one country to another for a specific period (Chen et al., 2002) and Expatriate teacher: Teachers who work in a country other than their own (Aydin et al., 2019) – which does not differentiate between Anglo-American countries and the Global South, though my study was really only looking at the expatriate compensation difference in international schools in the Global South.

“‘If we know better, we do better’ [Maya Angelou]. The question is, do schools want to do better and change this business model?”  -Raya, Study Participant 2021

When I first moved overseas twenty-five years ago, I was vaguely aware that expatriates were paid more than their local host country national (HCN) colleagues. For a long time, I quietly accepted this inequity as normal, as legitimate and as justified, which was how Bunnell and Atkinson (2020) described this phenomenon. For instance, expatriate teachers have to pay for their student loans, mortgages back home, and the foreign exchanges on savings! But it did not sit right with me, and my disquiet grew. Once I moved into leadership of international schools, I became much more aware of just how significant this difference is.

I interviewed 10 HCN participants from different schools around the world using a semi-structured interview style. The participants represented Colombia, China, India, Indonesia, Iran, Malaysia, Lebanon, a central African country, and the Philippines. They had a variety of educational experiences and qualifications. Nine of the 10 participants held a Bachelor of Education, a Master of Teaching, a teaching license, or equivalent. Six held a Master’s degree. Nine of the 10 participants had travelled to and resided in countries outside of their country of origin, and eight had attended higher education institutions in Australia, the UK, or the USA. Two of the participants could be described as third culture kids (TCK) having attended international schools in Austria and Switzerland during their youth. Figure 2 shows a map of their countries of origin.

“This idea that we've kind of all internalized that everything Western is better and more valuable” and “the marketing [of international schools pushes this narrative], because how do we sell ourselves as an international school if we don't?” -Soha, Study Participant 2021

Data collected from the interviews were transcribed by software and then analyzed by hand for standard codes and themes as they emerged from the data, and the themes and subthemes were generated inductively. I had anticipated that I would find that the phenomenon was not fair. What I had not realized was that the key themes that emerged were much deeper and included: 1. Power - which tends to belong to the Anglo-Western teachers, school administrators and school boards; 2. Othering – which is what these schools do in order to brand themselves and justify the differences in salaries between different teacher nationalities; and 3. the Cost of Compromise - as the HCN teachers internally battle with reconciling themselves working in an environment that implicitly says they will never be good enough. As Soha, one of my study participants told me, “I left the country [Lebanon] because I knew there was no future for me.” Figure 3 indicates the factors of the inequities in international schools. 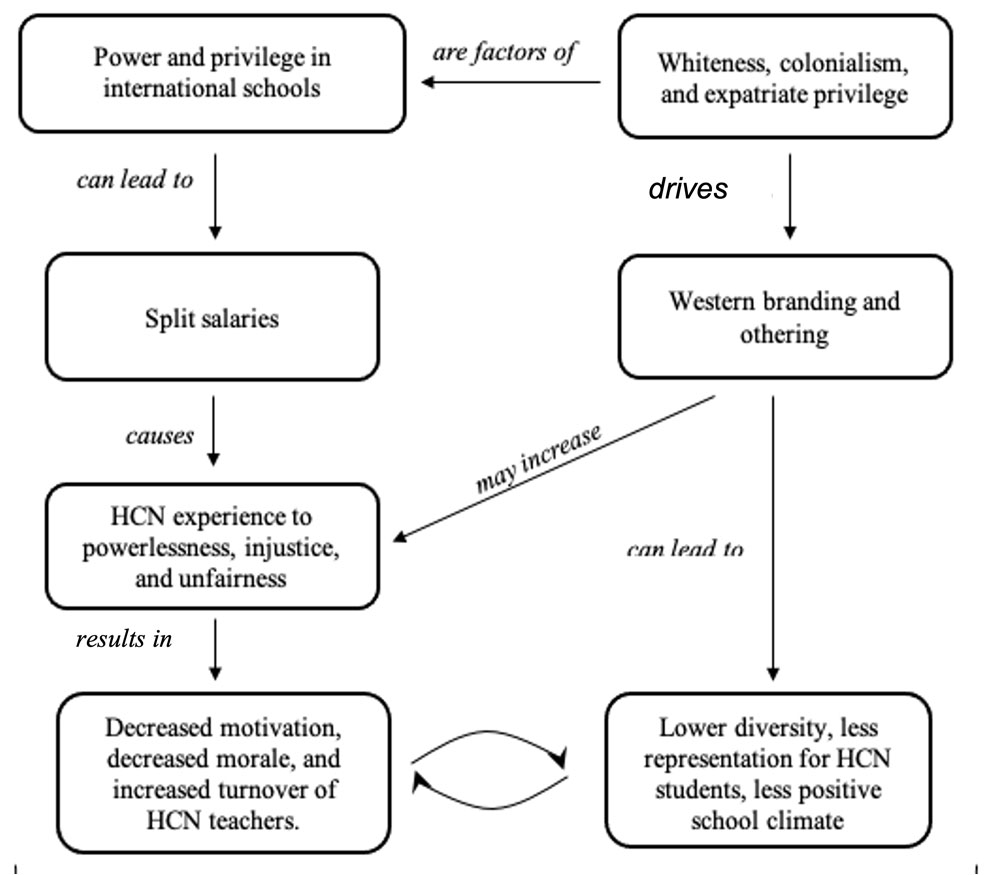 Reflection on the study

“…basically offered it to a new teacher, he was English and got it. He had no experience at all, but he was, he had the right passport.” -Carmen, Study Participant, 2021

In the process of this study, I was contacted by several expatriate teachers who did not want me to publish a study like this, perhaps because they saw it as a threat to their salaries and benefits. One expatriate teacher wrote to me that my research would be “biased and not support reality” another two both complained that I was neglecting the injustice of locally hired expatriate teachers not receiving the same benefits as overseas hired expatriates. Figure 4 shows the different levels or hierarchy of teacher salaries that can exist in some international schools. I was also contacted by an owner of a school who claimed to have information showing why he had to employ split salaries to keep his school profitable. As these people did not fit into my eligibility criteria for the study, I politely declined their assistance. But I found this pushback disturbing.

Using a purely competitive business approach to staffing does not align with international school missions. If international schools want to adhere to their missions and be truly diverse, equitable, inclusive, and just, they must examine the current economic models that justify split salaries and find alternatives or mitigations. This research can inform administrators and school owners that international schools should no longer be bastions of privilege.

05/09/2022 - Dr Liam Hammer
Thank you Oriana, for some it is eye-opening but for many of the local teachers that I spoke with it is a well known 'secret' that is not discussed but part of their every day lived experience. 04/01/2022 - Oriana Guzman
Good research work and eye-opening piece.