The Power of Mentorship for Women in Leadership

Learning from Women Who Lead
By Kim Cofino
13-Oct-21 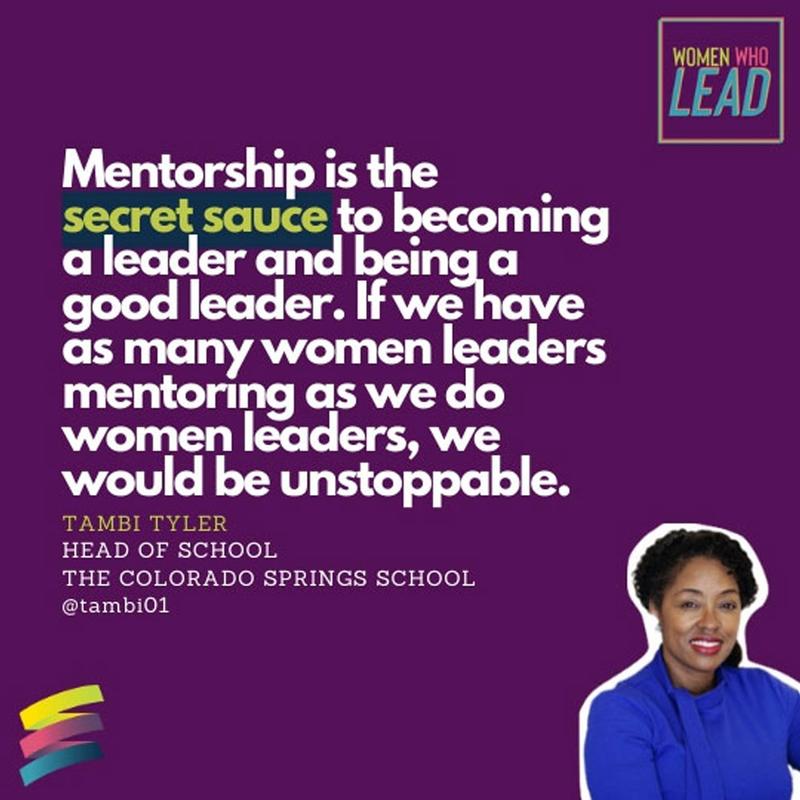 In a previous article in this column, I addressed the challenges of exclusive networking practices in international school leadership (Addressing the Elephant in the Room). Along with those implicit and explicit practices that favor more “traditional” leaders, women also have an additional challenge of lack of mentorship. In the Women Who Lead interviews, many women addressed the layered challenge of rarely seeing people who look like them at the leadership level, and how this can compound into having fewer options for mentorship from others who share similar lived experiences.

Tambi Tyler, Head of School at The Colorado Springs School, USA, didn’t grow up seeing a lot of African American leaders, but fortunately “the few that I did see were great and instrumental in reaching back and getting others to replace themselves.” The reality is, that if you “don’t see anyone that looks like you doing it, it’s a very far reach to see yourself doing it.” With so few opportunities for mentorship and guidance the pathway to leadership is much more challenging for women, and in particular Black women.

As Nicole states: “There’s a bubble around access and the engagement and conversations that happen in those social circles are not particularly welcoming unless you’re in that clique. If you don’t know how to play that game, it’s hard to break in. They all knew each other; they’d all been recycled through schools and they all get jobs.”

Early in her career, Grace McCallum was at a school heads’ meeting in Beijing where she was one of the only women. The men in the room immediately (and patronizingly) assumed she was a teacher, then kindergarten head, and then Elementary School Principal. The lack of representation in upper leadership positions reinforces the traditional stereotype among all genders that only men make successful leaders. As Grace notes, when these experiences happen to female leaders “it can shake your confidence a bit.” “I can get really angry about this, or I can use this as a way to practice being bold. Standing up for what I believe is right. Setting examples for female leaders that come after I lead.”

Junlah Madalinski pointed out that “Mentorship is critical and crucial, but it is a privilege. For women of color in educational leadership, it’s not something that is afforded to us. Especially if we’re seeking out mentors who are also women of color, especially if we’re seeking out heads who are actively doing social justice work.” This has led Junlah to struggle to find a mentor within the international school community.

Clarissa Sayson has faced the same challenges, noting that there have been limited opportunities to connect with women leaders in the early stages in her career.  In fact, she says “It’s only been in the last five years that I’ve been able to look to female leaders.”

Although things are slowly changing, it is still a struggle for many women to find mentors that look like them, that share similar life and professional experiences. The reality is that for those who need it most, finding a mentor is likely the hardest. In the Women Who Lead interviews several strategies were identified that we can all work towards - either as mentors, or for those seeking mentorship.

Many of the women I spoke to for Women Who Lead recognized that mentorship was either extremely valuable in their own experience, or that they would have benefited from the support of a mentor if they didn’t have the opportunity. Although some women felt strongly that a mentor should share similar lived experiences, many also highlighted that they had valuable mentorship experiences from men. There is no “one size fits all” mentorship model, but almost all of the women recommended that it’s worth finding a mentor.

Seek out a Mentor

If you’re struggling to find a mentor, don’t hesitate to ask. You don’t have to limit yourself to one mentor, or a mentor in your immediate school community. There are many ways to seek out mentorship.

First, and most importantly, don’t be afraid to ask. It may seem intimidating, but most leaders are not only willing, but eager to mentor others. Suzanna Jemsby, Head of School at Washington International School, highlights that you actually need to ask for mentorship. In her experience, very few people actually ask. She says: “We’re all sitting here waiting, you need to ask.”

As you are building your leadership capacity, you might find that you need more than one mentor - and that’s ok too! Katrina Charles, IB Diploma Program Coordinator at the American School of Doha, mentions that “it's good to have a plethora of mentors to do with a variety of things: physical health, educational career, having a family. Thinking one mentor can do everything for you, is probably unlikely.” It’s acceptable and appropriate to reach out to a variety of people to get support that meets your needs in many different facets of your life.

You might be realizing that you don’t have the opportunity for mentorship within your local school community - but your mentor can be anywhere! Abeer Shinnawi, of Altair Education Consulting, Baltimore, USA, notes that mentorship is even more important when you are feeling isolated (and leadership is already very isolating). She points out that often in leadership circles, “you can be the only female, and if you’re a woman of color, forget it.” When you’re in a situation where you don’t have a mentor within your school community, you can lean on them and channel their energy to keep you going and focused on your goals. You don’t have to be in the same physical space to learn from each other.

A mentor can be invaluable to you by identifying your leadership skills. If you’re not sure about your strengths or areas that you might need to grow, this is exactly the kind of reflection and support a mentor can provide.

Caroline Brookvam, Director of International School of Antananarivo, notes that often women need to be tapped on the shoulder for their leadership potential, and “if you don’t have recognition by the administration where you are, then having a mentor can help you build the skills and create the opportunities to be able to be recognized.”

As Chanel Johnson, District Math & Science Specialist in the US, says: “I don’t know how anyone plans to get anywhere without mentorship.” There are women who want to prepare for the next generation, even if the next generation surpasses them. We still live in a world where in many places, there are just men in the boardroom. As women we need to help another woman get to that room so there are more diverse thinkers in there.

Pull Up People Behind You

If you have the capacity to be a mentor for others, several women recommended that you go out of your way to do so. Grace McCallum notes “the highest call to leadership is when you’re pulling up the people behind you.” As women in leadership, we all have the responsibility to be sure that we’re normalizing female leadership.

Tambi Tyler, Head of School at The Colorado Springs School, says: “All women should be reaching back for other women across the depth and breadth of the organization. Be better mentors.”

The Importance of Having a Female Mentor

Daniela Silva, Head of Learning Innovation for EiM Global, points out that there are key differences between men and women leaders. She referenced a 2013 study from McMaster University (https://www.sciencedaily.com/releases/2013/03/130326101616.htm) which found that “female leaders are more likely to consider the rights of others and take a comparative approach to decision making” because they are more engaged in listening and consensus building. Therefore, when seeking a mentor, Daniela believes that it’s really important that women get mentorship from women.

When Rachel Hovington, Director of the International School of Hannover, began mentoring aspiring women leaders, she was surprised to hear feedback like “I feel like I can talk to you more than I can talk to anyone else.” Because she had always nurtured anyone she thought could go to the next level in leadership, she hadn’t realized the power of being a woman for other women leaders. Once she heard that feedback, she realized how important it was to coach and mentor women leaders and empower them, and how important it was that she was a woman doing it.

Grace McCallum also notes the importance of having a female mentor because you need support from people who are going through things with a similar lens. Although she has had amazing and supportive male leaders, she recognizes that the female experience is different. It’s transformational to have the support of someone with similar experience and talk frankly and transparently about what that’s like. The further you go up in the ranks, the lonelier it is. “It’s so key for female leaders to find your leadership tribe, cultivate those relationships and value them because that’s what will get you through to be successful.”

Mentorship Comes in Many Forms

If you feel isolated in your leadership journey in your current school context, you’re not alone! Many aspiring women leaders feel exactly the same way. Trying to find a mentor isn’t always easy. Get started by learning from all 70+ women I interviewed for Women Who Lead inside our Certificate Program. Mentorship doesn’t have to start at a 1:1 relationship. You can learn from the experiences of those within the program and then begin a more personal mentorship journey from there. Find out more at: https://edurolearning.com/women.