Breaking the System Through our Collective Stories 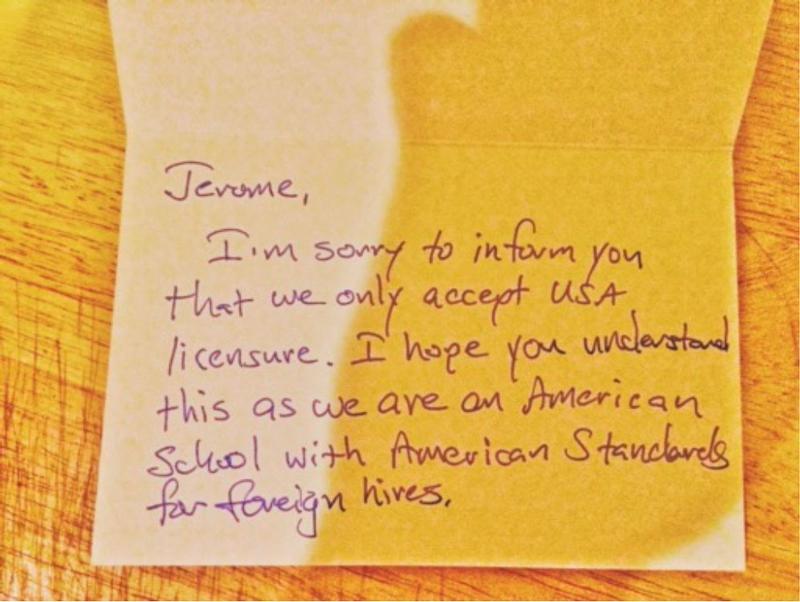 “Behind strong people, there is a story that gave them no choice.”
- Paulo Coelho (Brida)

It was February 14, 2015, and I was feeling great. It was my first time setting foot in the United States, a bucket list item I was quite doubtful that I would tick. Also, there was something about the cold breeze in San Francisco that I haven’t experienced before, having lived most of my life in a tropical country, the Philippines. Navigating my way through the BART railway system left me nothing but excited, “I was swimming through the tides of change, and this would change my life’s trajectory.” Despite the tension in the San Francisco job fair, I was in high spirits. It was one of the last job fairs of the hiring season and I hung on to my principal from IS Manila, who was recruiting in this fair as well, for support. My mentor, Simon Gillespie, helped me with all the preparations. I had a detailed CV, and I was armed with a couple of mental notes from several meetings and mock interviews. However, even after sending out letters of application to several prospective schools that fit my profile, there was one thing that I wasn’t prepared for, a handwritten note, “Jerome, I’m sorry to inform you that we only accept USA licensure. I hope you understand this as we are an American School with American Standards for foreign hires.”

Words sting and these were particularly haunting. Instantly, my towering spirits crumbled, I was questioning my worth and, at that moment, I felt defeated. Although, in this narrative, I chose to dwell on the resolution of my journey. To let yourself heal and still live with an open heart despite a defeat is a massive gift to the world and yourself. Six years later, I am currently teaching at the American International School of Johannesburg and have two other reputable international schools under my belt. In order to do better, we need to first acknowledge no matter how disheartening it is that race is a hindrance to success in the international school community, stories like this shouldn’t even be worth telling. I am fully aware that my journey seems like one in a thousand, brought by a stroke of luck and sheer determination, and it only proves how elusive the chances for success are for those who are marginalized by their nationality. The systemic racism in international schools has stripped me of several opportunities, disqualifies my experiences, and halts the potential of me being the best educator that I could be. I was left with a realization that I have far fewer chances and a much smaller margin for error.

When discussing diversity, people often bring up the idea of a tunnel, where the focus is on bringing in as many qualified, underrepresented, or underprivileged candidates as possible. But perhaps it’s time for a paradigm shift and thinking about it as less of a tunnel and more of tunnel water leakage. If we want to start to fix and seal the cracks and leaks that leave people behind, the first step we need to begin with is a safe space for dialogue on unspoken inequalities that we experience in the international school community, no matter how uncomfortable it could be.

In addition, we need more people championing this cause. I remember in moments of rejection, all I really needed was someone to believe in me. Malcolm Gladwell’s words helped me to identify my experience in a way that I wasn’t able to fully articulate myself, “To find and encourage talent, all you have to do as a society is to make sure the right doors are open. You raise your hand and say, ‘Over here!’ And the talent will come running, but that’s not true … It’s not resilient and shiny. Talent is fragile.” Yes, we could easily sign up for a job fair, but on top of this, we need champions that would help us jumpstart, sustain, and catalyze our success. We need an international school system that is brave enough to accept the leaks of this pipeline and willingly work together to repair it.

My first international school post was for Academia Cotopaxi in Quito, Ecuador. I was hired by our director, Madeleine Maceda Heide, a fellow Filipino. This showed me the importance of visibility and representation. It validated that I am good enough because our leader is proudly representing my roots and paving the way to rightfully take our place in this community. Madeleine changed everything. I hope she’s reading this since I don’t think I even said thank you enough. Thank you.

Later on, I worked at the International School of Tanganyika in Dar es Salaam, Tanzania, and the American International School of Johannesburg. In both of these schools, I was lucky enough to work with Filipino colleagues and a diverse roster of teachers. It’s often only possible for marginalized educators like me to reach their potential when we have a champion who can not only show us the way but help carry us there. These schools are that hero for me. Schools that believed in us, made opportunities happen for us, and persisted to take a chance based solely on our potential. It has helped me deal with the real battle that most marginalized people face which can be much more insidious and intangible - Internal Inferiority. Am I good enough? Do I really deserve this spot? How can I make up for my losses? I started off my rookie year abroad with an immigrant mindset: Keeping it under the radar, work hard, and constantly reminding myself not to burden others - you’re already lucky you made it here. Many times, I also felt awful and ashamed, wishing that I was born in another country and had better opportunities to have even a chance to meet the “American Standards.”

On top of that, I felt a huge weight on my shoulders. Many of us trying to build our portfolio from the ground up learned to adapt with survival instinct. Once you see a small window, you become laser-focused on that opportunity knowing fully that you are not allowed to mess up, not even once. Every day, I am reminded that my success is never owned, it is only rented, and the rent is due every day. You don’t take it for granted because you understand you’re playing by someone else’s rules. Even today, I often feel like that. Given the long odds, we fight to be where we are, it feels like we are always walking on thin ice and our world feels very fragile. It is exhausting. Fearing that at any moment, the clock could strike midnight, and all that we’ve worked hard for could be taken away from us. I hang on to colleagues and friends that I could openly talk to about these feelings, in an effort to strengthen and reinforce the reality of what we’ve built and our daily struggles. I hope you are able to find these support systems to keep you going.

My hope is that sharing my personal narrative will be an empowering way to raise a sense of urgency after revealing the challenges that our fellow educators face and finding ways on how we, as a community, are suited to help each other to do better. To everyone who resonates with this experience — who has felt like they don’t belong or aren’t good enough — the world needs to hear your story. Only then can we create a better chance at an opportunity that we once saw as elusive. And just remember: You are good enough. You deserve to be here.

08/22/2021 - Elvira
Thanks for sharing your story, Jerome. I have faced my fair share of this in Asian countries where 'native speakers' or certain nationalities are preferred. Hopefully our voices will be heard, and change will come. 08/18/2021 - Queca
Thank you for sharing your story. All schools speak about international mindedness, but.... the buts.... are always there. Like ... "Sorry, you can not teach science as you are not a native speaker and you have a strong accent o your mother language," even having an Honors and a Masters in Science field, or even having done research in very recognized labs and institutions. I hope this change because there are real educators who seem not to hold the right passport. 08/11/2021 - Paola Torres
Mr. J!!! Thank you for inspiring us through your voice of courage. Way too many experience systemic racism and stories like yours influence change. Sooo proud of you! 08/07/2021 - Ganga
Hi Jerome,

Thanks for sharing your story. It truly inspires, I believe rejection makes us to be strong. I am from India with good hands on experience and sound knowledge on administration. With this confidence, I tried to work in Usa, as you said it started with rejection. With this rejections, I realized that I need more exposure on education standards of abroad countries. I've started to dig, to learn and will never stop till I reach on what do I want achieve 08/04/2021 - Sharon
Jerome,
Thank you for sharing your thoughts and experiences. It’s nice to know there are schools and administrators out there in the world who recognize that a mere piece of paper doesn’t make a person. I celebrate your successes and wish you all the best as you continue your international educator journey. Keep up the great work! 08/04/2021 - Vanessa Weber
J - thank you for always striving, thriving and never settling. Your work makes me work harder for educational systems and our students everyday. Your vulnerability and honesty inspire us all.