Facing the Reality of Stereotypes in our Leaders 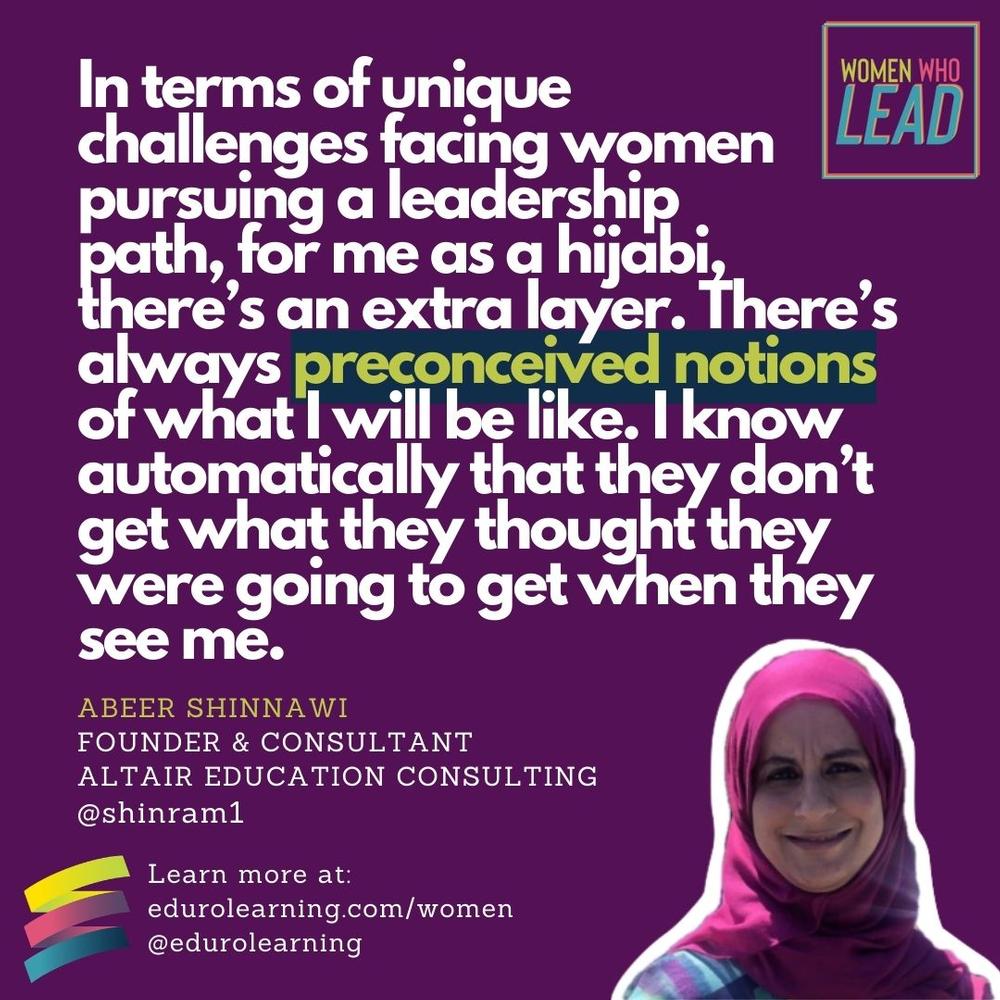 Along with all of the well-known stereotypes about gender and leadership, the Women Who Lead interviews highlighted additional layers of expectations and bias facing women pursuing a leadership path. The intersection of all these stereotypes can multiply the challenges that women face in their leadership journey. Better understanding those challenges as you embark on your leadership career, or as you recruit and hire women, is an essential first step to challenging and overcoming them.

This article will provide a closer look at the following intersectional challenges:

Elsa Donahue, now Head of School at Vientiane International School in Laos, realized early on that not only her gender but her speaking accent got in the way of her being offered Head of School positions. During her Women Who Lead interview she points out that, for “schools that were defined as being American schools, I didn’t potentially fit. Though that was never explained to me, I could figure it out.” Elsa discovered that an unspoken requirement of speaking English with a stereotypically "Anglo" accent was one of a number of factors that, particularly for women, might impede their progress or even tip the balance one way or the other during hiring.

Marta Medved, Head of School at Western Academy of Beijing, China, also feels that she’s categorized as “different,” not in terms of appearance, but language background. She describes experiencing this inequality in attending professional learning, “when you are surrounded by a group of 20 native speakers and you’re the only second-language speaker,” noting that in these situations it might take longer to process in a second language.

Along with accents, prejudicial assumptions that people from specific cultural backgrounds share particular traits were common in these conversations. From Asian and Muslim women tending to be perceived as “meek” to Black and/or African American women being perceived as “angry,” these cultural biases can be unspoken obstacles during the interview process—and often continue as ongoing challenges even once the position is secured.

As Abeer Shinnawi points out, “for me as a hijabi, there’s an extra layer. There are always preconceived notions about what I will be like. I know automatically that they don’t get what they thought they were going to get when they see me.” Being the only young Muslim woman in her school community, she always felt like she had to prove herself, and even among peers and colleagues, she always had to push against the perception of being a meek “wilting flower” because of her hijab. Fighting against these stereotypes, particularly ones involving visible signs of cultural and/or religious affiliation, can seem like a never-ending battle.

Many women also spoke about realizing that their actual stature had been an unspoken obstacle to securing a leadership position. When you combine physical size with heritage, linguistic background, and other qualities subject to bias, a unique set of intersectional challenges is created. As Madeleine Heide highlighted, “I don’t have the profile of being a leader: I’m a woman, I come from Early Childhood, I’m not a white woman, I’m biracial, my heritage is Philipino and I claim my Philipino-ness. These are all 'points against me' in terms of stepping up to the top leadership position. In my experience, people have stereotyped notions about what leadership looks like. I can see them wondering when they look at me… Can you lead? Here I am.”

Clarissa Saysons, currently Elementary School Principal at International School Beijing, had very similar experiences. She describes herself as short, Asian, with a youthful appearance. She’s heard the comment “you look too young to be in a position of leadership” more times than she can count. Even though she knows she doesn’t fit the typical stereotype of what it means to be a leader, she knows she’s “a powerhouse” but still has to manage these kinds of comments on a regular basis.

Jasmeen Philleen, Assistant Principal at International School Manila, talks about the weight of responsibility she feels of not only representing herself as a Black woman, but also representing a long line of African American people. She is forced to carefully try to navigate the world knowing that when she’s new to a school, parents can be initially reluctant to have her as their child's teacher - simply because of the color of her skin. While these stereotypes exist at all levels of education, it’s definitely still the exception to see many faces like Jasmeen’s in leadership positions in international schools. As a leader, she realizes that she’s unique, and this, as she mentions, “makes me strive even harder to prove myself, to prove that I am worthy.” Similarly, Tambi Tyler, Head of School at the Colorado Springs School, highlights that she had “three strikes [against her] coming out of the gate: as a leader, I’m young, I’m Black, I’m a woman.”

Each of these women (and the others interviewed in the Women Who Lead series) have had to battle some combination of these and other stereotypical assumptions about them every day—and usually on their own, since so often they are the only person who looks like them in their school community. Although there is no one simple solution to any of these issues, several women spoke about the ways we can tackle these challenges.

Fiona Reynolds, Deputy Head of School at the American School of Bombay, mentions the importance of women owning their own voice and communication style. By copying “traditional leadership styles” and being direct, we might be losing the chance to benefit from unique individual or cultural styles of communication. As women, “We need to shift the narrative on what makes a good communicator. Trust that people will figure it out instead of transforming your style to a stereotype.”

As an Asian woman in the EdTech field, Anita Chen notes that in her first tech director meeting in Asia there were about 40 white men... and she was the only Asian woman. Being surrounded by men at that time was intimidating for her; she says she “felt a little bit small in that moment, I didn’t know how to find my voice and speak out.” Later, during a job interview for a leadership role, she was told that the school was particularly interested in working with her because she was Asian and a female. “In that moment, something that I thought was a weakness became a strength.”

In her Women Who Lead interview, Sawsan Jaber, currently teaching in Illinois, USA, and Founder and Consultant at Education Unfiltered, talks about the importance of making yourself marketable without compromising anything that’s important to you as a professional or a person. She focuses on finding the right fit for her values and beliefs. As Sawsan says: “If they’re not proud to have a person of color, who is a proud Muslim, who wants to work for the betterment of all kids, I’d rather not work for that district.” In a leadership position, this match of values is even more crucial.

Not all women feel ready to make the leap into leadership, but the majority of our Women Who Lead highlighted the importance of taking the risk. Jasmeen Philen points out that we need people of diverse backgrounds in positions of leadership, “because when you’re in leadership, you have the ‘ear’ of the highest-level leaders.”  As she says, “when you root for the underdog, everyone wins.” As our school leaders begin to more accurately reflect the world around us, and the community they serve, the more those voices will be heard, acknowledged, and represented in all aspects of learning.

Katrina Charles, IB Diploma Coordinator at the American School of Doha, notes that women in leadership need to be normalized in order to model for the next generation what leadership can look like. She points out that “if we want to see more women in leadership, those who are in it have to keep digging and make it easier for our sisters to follow us. It’s about solidarity, more voices, with different experiences, backgrounds and perspectives working for the same cause.”

Better understanding both the stereotypes and expectations you may face in pursuing a leadership role, and having some strategies to deal with them, may help you feel more confident in taking the next steps towards your dream job. Our Women Who Lead participants tell us that recognizing that they are not alone in facing these challenges has helped them own their leadership and stop holding themselves back from putting themselves in the running for a leadership position. In the next article, we’ll dive into the perception that there are limited positions for women in leadership, and that women have to fight each other for those roles.

Does this resonate with your personal experience? Are you ready to own your leadership and make a difference in your school community? Explore more from our women who lead and learn how to make an impact at: https://edurolearning.com/women/.

Kim Cofino has been an educator in international schools since August 2000. Having lived and worked in Germany, Malaysia, Thailand, and Japan, Kim has had a variety of roles in international schools, including (her favorite) instructional coach. Now based in Bangkok, Thailand, Kim is the co-founder and CEO of Eduro Learning, which offers online customized professional development in a community-driven environment, including COETAIL, Women Who Lead and The Coach Microcredential programs.  Kim is co-author of Your Connected Classroom: A Practical Guide for Teachers, as well as co-host of the #coachbetter podcast and YouTube series. Find out more about Kim at edurolearning.com.