What’s the Line between Culture Shock and Racism? 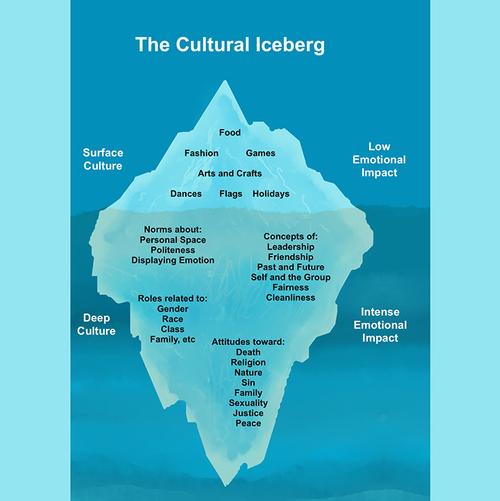 Having drinks with a group of International school colleagues a few years ago, a white colleague casually mentioned, “I couldn’t stand teaching Arab kids—so entitled and rude. I couldn’t wait to get out of there.” Other colleagues started nodding and sharing their own stories of rude kids, escalating and embellishing the stereotype.

I could feel my skin get hot and my heart start to beat faster; shock and anger coursed through me. These are international school teachers! They’ve lived all over the world—they're my people; they’re not supposed to be racist. And yet, there they were, using bigoted language to lump all Arab kids together in one homogenous, negative group. Images of dear Arab friends rose in my mind, special memories that I felt that I was betraying by sitting at this table. Gulping down my drink, I made my excuses and got out of there as fast as I could.

I wish I would have said something that day: interrupted the narrative they were spinning, questioned their assumptions, helped them learn. But I was scared, and angry, and didn’t have the words.

In my own mind, I justified my lack of speaking up in that situation by saying to myself, “They spent a few years in an Arab country and had some really hard experiences. They are just expressing culture shock.” That made me feel better at the time, but that excuse is feeling less and less comfortable the more I’m learning about anti-racism.

Culture shock is a state of deep distress, anxiety, and uncertainty, and it is a totally normal and predictable response to moving to a new country. As part of our new faculty orientation at my current school, we introduce newbies to the Culture Shock Curve, and the various possible psychological and even physical symptoms they might experience as a result of moving to a new country. We should expect to feel negative feelings as a part of our transition. So if the frustration and even anger is normal, why does the conversation above still feel so racist?

Part of the answer, I’m coming to realize, is that racism itself is normal. Now, don’t get me wrong, I don’t think it’s acceptable. But we swim in a sea of white supremacy and imperialist ideas, both in our home countries and in international schools. As Robin DiAngelo says, getting beyond the idea that only bad, mean people are racist will help us confront the racist ideas and statements that we do experience. Racism and bias are unconscious, so even very well-intentioned educators can be racist.

As I consider the line between culture shock and racism, I find the culture iceberg model helps me get closer to unraveling this issue. Food and festivals are the obvious trappings of culture, but the ways we’re really different are in assumptions about the world, norms, communication styles: the unwritten rules.

When we encounter differences at the top of the iceberg, like different foods, the emotional impact is usually quite low. Enjoy a new food or not, but the emotions you experience the first time you encounter foreign foods aren’t usually overwhelming. Many of us who go abroad love experiencing the differences at the top of the cultural iceberg—the festivals, the fashion, and of course, exciting new flavors.

However, when we encounter differences below the surface of the cultural iceberg—differences in assumptions, differences in values, the emotional impact is LOADED. It’s human nature to react with intensely negative emotions when our core beliefs, assumptions, and norms are contradicted.  Culture shock is just people getting overwhelmed with the amount of difference they’re exposed to day to day.

Let me share a personal example of how breaking unwritten rules causes intense feelings. When I stand in line in some parts of China, the person behind me breaks all my unwritten rules about how close to stand. They stand physically touching my back. It makes me intensely uncomfortable, because in my culture, breaking this unwritten rule is a signal of aggression: it means you’re about to sexually harass me or maybe throw a punch. No surprise that when this happens, I can immediately feel my blood pressure rise, and my heart start to beat. The feelings of fear and even anger when this happens aren’t wrong in themselves.

So what should we foreigners DO with all these feelings? Fortunately, Dr. José Medina offers a simple strategy that applies to almost every situation:  4 questions that can make or break your response.

I am a guest in this country.

I am not the one whose white/western norms are central in this situation.

What do I believe?

Here in China, this person is not trying to harass me by standing so close to me. They are following their own unwritten rules, and I am the weird one here, for expecting so much personal space.

What do I need to do to serve others?

Respond politely but firmly, ask for the space I need in order to feel safe.

These four questions help me to gather myself enough to respond instead of react. My kids and I now have a strategy, of placing our luggage behind us in line, so that the people behind us won’t crowd our personal space quite so much.

These four reflective questions also help me to later avoid rants that lump all Chinese people together in one stereotyped, negative group. They help me manage my emotions.

Another idea Dr. Medina shared helped further push my thinking on cross-cultural interactions. When we encounter difference, we can respond in additive or subtractive ways—there's a continuum of cultural proficiency.

Additive or subtractive... it's such a simple lens to use to check ourselves when we’re talking about our host countries. It’s very easy to be subtractive and presume the worst when someone breaks our unwritten rules.

So although it’s not wrong for me to feel scared and angry when I’m crowded in line, it would be wrong for me to rant about Chinese people and lines. I’m the guest here. My stance needs to be one of humility. And as I spend more time as a guest here in China, fewer of these differences will catch me off guard, and my culture shock moments will become fewer.

In the situation of the white teachers ranting about Arab students, the teachers’ feelings of frustration are not wrong. But their subtractive lens, blaming the kids and lumping all Arabs together in one stereotyped group? Yep, that crossed the line.

If we put an additive lens on their experiences, perhaps the Western teachers had different assumptions about the level of hierarchy that is appropriate in a teacher-student relationship—the students might have expected a more egalitarian relationship with their teacher than is normal in Western culture. The "rude” behavior might have seemed appropriate to those students. Or perhaps there was something else entirely going on!

What if, instead, those teachers’ response had been one of curious inquiry? What if they had honestly tried to find out what was causing the challenging behavior? Learning more about the students’ motives and worldviews could have allowed these teachers to find strategies to serve those students much more effectively. Not to mention they themselves would have had a lot less frustration to deal with.

So, fellow international teachers, when you find yourself frustrated about another culture, pause and ask yourself Dr. Medina’s four questions:

What do I believe?

What do I need to do to serve others?

Then presume positive intent, remind yourself that you are the guest, and work on building a stance of humility and curiosity about the differences you encounter.

You might find that you discover great richness in learning from other cultures, and you’ll certainly be less likely to be caught in a racist rant.

Ruth Poulsen is Director of Curriculum and Assessment at the International School Beijing.