Learning from Women Who Lead: The Path to Leadership 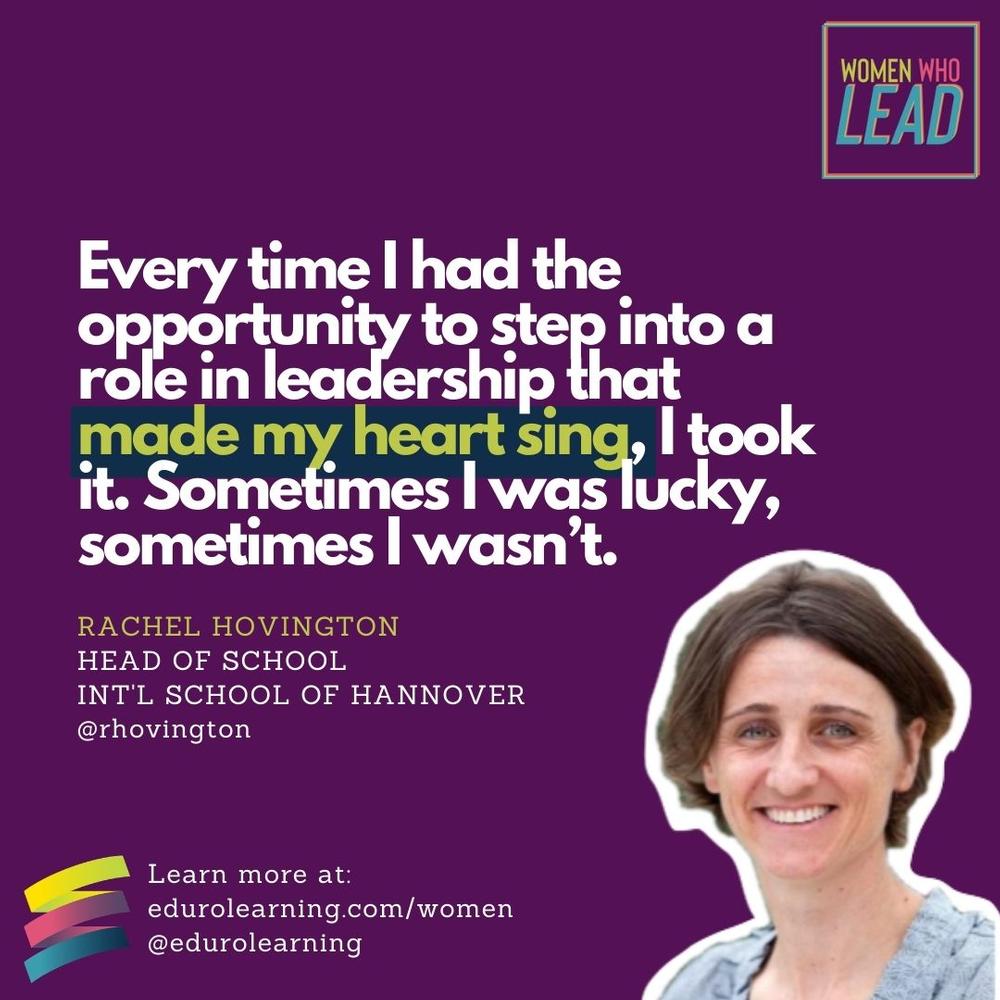 Learning from Women Who Lead is a series by Kim Cofino featuring highlights from over 70 interviews she has conducted with successful women leaders, addressing the unique experiences of women in leadership in education contexts around the world.

“Every time I had the opportunity to step into a role in leadership that made my heart sing, I took it. Sometimes I was lucky, sometimes I wasn’t.”
—  Rachel Hovington, Head of School, International School of Hannover

We often view our leaders as having carefully crafted their careers from the outset, always knowing that leadership was their path, and moving intentionally through the process. However, during the Women Who Lead interviews, it became clear that there are as many paths to leadership as there are leaders. Each journey is unique, and as polished and successful as we see our leaders today, they didn’t all start out that way.

Although each story is unique, I saw four clear trends emerge in these interviews:

Let’s dive a little deeper into those four trends:

Growing up a Leader

We’re all familiar with the stereotype of girls and women who take charge as being “bossy.” Many of the women I interviewed mentioned that they were called bossy as a child, that they either took charge of their younger siblings and family members or tended to organize their friends at school.

For those women, the path to leadership seemed like a natural progression; they often found themselves either invited into positions of leadership or seeking them out.

For Fiona Reynolds, Deputy Head at American School of Bombay, her leadership journey began on the playground. When I spoke to her last year, she joked, “Do you start with being a bossy kid in elementary school?” And then went on to highlight that she “worked in a few different organizations and always ended up being the assistant to the President. So I got a taste of leadership then, and perhaps they saw something in me.”

Catriona Moran, Head of School at Saigon South International School, described her path as stepping up to responsibility when offered: “I raised my hand. I said 'yes, I can do that.' When I had a chance to volunteer throughout my life, I said 'yes I can do that'… Although I never started off trying to be an administrator as a leader. My skill and experience grew, through the course of raising my hand, I became an administrator and then a leader.”

These early opportunities to embrace leadership skills, whether labeling them as such or not, clearly laid the foundation for formal leadership later on in life.

Lack of Interest in Formal Leadership

Many women spoke about not expecting to be a leader, that instead of seeking out leadership positions, they unexpectedly found themselves there. In fact, even when presented with the opportunity for leadership, many women turned down their first or even second opportunities because they didn’t perceive leadership as their pathway.

Among the more “resistant” leaders, many spoke about being more interested in continuing to work with students as the focus of their role, or a passion for curriculum development rather than administration. This highlights the need to continue to identify leadership capabilities and connect them to specific positions so that potential leaders can see a possible pathway that’s right for them.

Arden Tyoshin, Head of School at Harare International School, found that her leadership career happened “almost organically.” She found herself handling an unusual incident of injustice while in a teaching position, and the way she approached this situation was noticed, leading to a very positive outcome. She says, “I didn’t have any grand dreams of having a leadership role. Within that context I was offered a small leadership role and it grew from there and was very fulfilling, and that’s how I ended up being a head of school here in Africa.”

Katrina Charles, IB Coordinator at the American School of Doha, notes that she didn’t aim to be in leadership, but it happens by default. Throughout her career, she recognized that she has a voice and that she could put her voice in to represent the underrepresented. Katrina says “It’s not about getting into it for the sake of it, it’s for making a change. Leaders lead from the back, not the front.  It’s your job to support everyone on the team to be the best you can be, with you at the back propelling others forward.”

Whether unwilling or unexpecting, these women have found themselves in positions that they love. For those that are unsure if leadership is their pathway, hearing these stories of “accidental leadership” can be an eye-opening experience.

The Impact of Being “Tapped on the Shoulder”

Many women highlighted the importance of being “tapped on the shoulder” for leadership. They may not have seen leadership within themselves from the start, but when others point out their capacity, they begin to internalize that they have the capacity to lead.

When Elsa Donahue, Head of School at Vientiane International School, describes her leadership path, she calls it a “journey of serendipity.” When she was on a WASC accreditation visit, the HOS unexpectedly asked if she had ever considered leadership. For Elsa, the seed was planted. She says, “It has been a journey of being at the right time with the right person, who has seen something in me and planted a seed. Because I’m a curious person and always seeking to explore challenges, I dove in.”

The right question or statement of encouragement at the right time made a huge impact on many of the women I spoke to. We all have the power to share an observation about leadership capacity with those around us. Who knows where a comment or question might lead?

Perhaps the smallest percentage of women I interviewed had intentionally mapped their path to leadership. These women made the decision to step into leadership and to strategically plan out exactly how they were going to get there.

Sanee Bell, Middle School Principal in Texas, always knew she wanted to be a school leader. She followed the traditional pathway, looking for leadership roles in every opportunity. Her philosophy is to “get ready for your next job in your current position.” When Sanee talks about her path, she says, “It’s all about intentionality. Sometimes as women, we fall into things. I knew I wanted to be a leader so I was always preparing for that. It wasn’t by accident. I already knew that was the path I wanted to take.”

Like Sanee, Sheena Nabholz, Head of School at Lincoln Community School in Ghana, always knew that she wanted to be a leader. She says she likes the idea of being part of something bigger than herself as an individual, and “being part of the cause.” Being a leader, and using her skills and talents to benefit a group endeavor, gives her a lot of joy in her work. Looking back, that feeling of significance and impact has always led her to leadership and the ability to see the big picture.

Whether intentional or not, all of the women I interviewed had a moment (or series of moments) when they recognized their capacity to lead. For some it happened very early in their lives or in their careers, for others it came later. We’ll explore this facet of the leadership journey in the next article in this series. Do you have the potential to lead? Explore more from our women who lead, and see all of the videos sharing these individual journeys to leadership at: https://edurolearning.com/women/

With 20 years of experience as a teacher and instructional coach in international schools, Kim Cofino is now founder and CEO of Eduro Learning, offering online customized professional development in a community-driven environment.