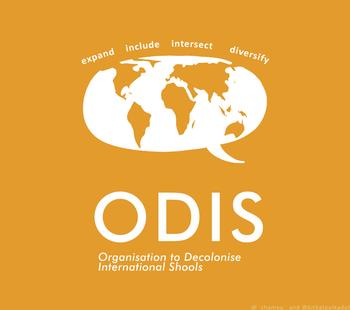 It has been over two months since we began ODIS, the Organisation to Decolonise International Schools, in the face of global crisis. The year 2020 has been rife with climax, from coronavirus to Black Lives Matter protests. It has also been three years since we graduated from high school, leaving our expat bubbles for the "real" world.

We are Xoài and Clara, aged 21, two International Baccalaureate (IB) alumni, studying in France and the UK, respectively. Our experience of recent events has been characterised by our move to the West for university, by our European heritage (French-Vietnamese and British-Portuguese), and the culture shock of "repatriation."

Moving to our passport countries has highlighted the differences between ourselves and our new, local European peers. Yet, we are more like these Europeans than the locals of the Global South where we grew up. We were raised in their world, conditioned for the West. As "global nomads," we were exposed to, but not influenced by, "third world" cultures. The international school culture in which we were raised is generally synonymous with "white" culture—the assimilation of it and consequent "othering" of everything non-white.

We are realising increasingly how our global education systems were founded on colonial values, on Western dominance and, inevitably, White Supremacy and racism, specifically anti- Blackness. Behind these "big scary words" are mentalities built into our systems and internalised by transnational students. Being recent graduates, we are still slowly unpicking the makeup of our conditioning.

It is perverse that it took the sensationalised murder of George Floyd to make us realise that society, beyond just the United States, is not post-racial as we had been brought to believe, and expat communities are not above it as we had thought—far from it. This snowballing awareness is what compelled us to act.

We started a petition to the IB demanding significant reform of the curriculum, appealing for inclusive, diverse and intersectional—namely anti-racist—teaching practices. Webinars were held with friends, teachers and alumni.

It became rapidly clear that the problem was much bigger than the IB and expat society. The very foundations of International education are racist, beginning with missionary and UN schools, developed in the West and established in the Global South, perpetuating eurocentric values, neo-colonialism, and white supremacy.

So we took it step by step, eventually expanding to include non-IB international schools. In over two months we’ve created social media platforms, surveys, published an article, and were featured in a number of podcasts and panels. Drawing inspiration from preceding movements such as Rhodes Must Fall and the Black Curriculum, we created our mission statement. Most importantly, ODIS has a growing database of alumni-led initiatives representing over twenty-five international schools around the world with whom we are regularly in contact, sharing their progress on our platform to spur movement from our following. In these pseudo-apocalyptic times, modern technology has allowed us to form a grassroots movement with people we’ve never met, through pixels and code.

Ideally, every school would have a student-led council bridging parents, staff and alumni to push for accountability and transparency, galvanising institutions to take on new practices that include and empower marginalised groups.We picture a transition to decolonised and anti-racist education, with accreditation based on equity. We picture regional summits and youth programs (such as girl scouts) that explore and celebrate diversity, equity, inclusion, and belonging (DEIB). There is always potential for more and better.

As ODIS evolved, so did its creators. We are two individuals running this project, with different personalities. We are of mixed backgrounds, but essentially white girls who’ve experienced international schools, and now the pandemic and worldwide Black Lives Matter protests, in our unique ways. This shows in our input in the work.

Clara: Despite my supposedly ‘internationally minded’ upbringing, I did not learn that the word “Black” wasn’t taboo or rude until January this year. Following George Floyd’s murder this past May, my social media feed became awash with posts about tone policing and institutional racism, terms I had never heard before. I began a steep learning curve which led me to rediscover the concept of decolonisation and its necessity. Due to my privilege, race had been an American-only issue for me, until now, when I learned the UK is not the great slavery abolitionist it declares itself to be. The exploitation of Black people has continued to benefit our society to this day through neo-colonialism and compensation of slave owners.

Xoài: I had to acknowledge some internal resistance at the beginning of this project - it took time to realise that resistance was there. But once it hit me, I had to stop and process how much I still had to (un)learn. I have deeply embedded biases despite my supposed worldliness and tokenistic Asian halfness. Why was I working on this project when I still shied away from calling international schools racist? I wanted to be inclusive of sexism, ableism, homophobia, and so on, in a way that minimised the issue of racism. But let’s call a spade a spade - anti-racism is ‘trending’ because it is relevant. Addressing one form of discrimination can automatically be instersectional with other forms of it.

Though ODIS has gained considerable momentum since it began, as the academic year begins it is the responsibility of educators and the international school community as a whole to take up the mantle.  Echoing the commitment to action by the Association of International Educators and Leaders of Colour (AIELOC), we ask leaders in international education to stop and ask themselves how they are upholding Western Supremacy. What racial biases and attitudes are you perpetuating? If you feel uncomfortable, good. Ask yourself why. Commitments must be made on a local level, on campus, as well as within curriculum and accreditation organisations. There needs to be a safe platform for minorities to speak out. Students of Colour in particular need to be given the tools to articulate their experiences. Native-language and race barriers must be abolished from hiring practices. Curricula should be standardised to incite more inclusive teachings whilst remaining flexible for educators. Leaders must recognise how their schools displace local communities, and develop authentic collaborative relationships with them. Diversity should not be celebrated exclusively on International Day - every day should be international day at an international school. Our education is long overdue for an update.

Special thanks to Danau Tanu and Kelindah Schuster for editing.

12/01/2021 - Gerrity
Was wanting information about signing up my son. He's credit difficulties at Kettering school caps. Let me know 09/11/2020 - Liam Hammer
Well said ladies, we must seize the momentum and push for reform while we can and this current interest in DEI remains a ‘trend’. Another former IB alumni and former student at NIST has also been lobbying for similar changes! 09/03/2020 - Mark Webber
This is an excellent article. Thanks for writing and most importantly sharing it with us. I think you still may not have understand the power that you have in the international school community.
First of all, we must be proud of you for using the voice that you gained in the international schools community, for better or for worse, to call out your own community for its misdeeds. Secondly, we must listen to you because you are the protege of the IB and international schools community and if we are to say you are wrong, then we must have been the ones who failed you.
Keep fighting the good fight and I hope you don't mind me posting your article on my social media.
Sincerely,
Mark Webber

Reflecting on the Tenacity and Tensions of Transformation
By Joel Llaban Jr. Jul 2022