Alsama Project is an organization providing secondary education, cricket training, and employment to Syrian refugees in Lebanon. Soon after opening the doors of its first secondary school in Shatila refugee camp, Alsama realized that many of its students were struggling with tough family environments. There were often cases of domestic abuse, the risk of early marriage leading to abandoning education, and pressure from their families to earn money. To ensure uninterrupted education and the well-being of the students, it was crucial to nurture healthier family environments; so Alsama began a women empowerment and awareness course. 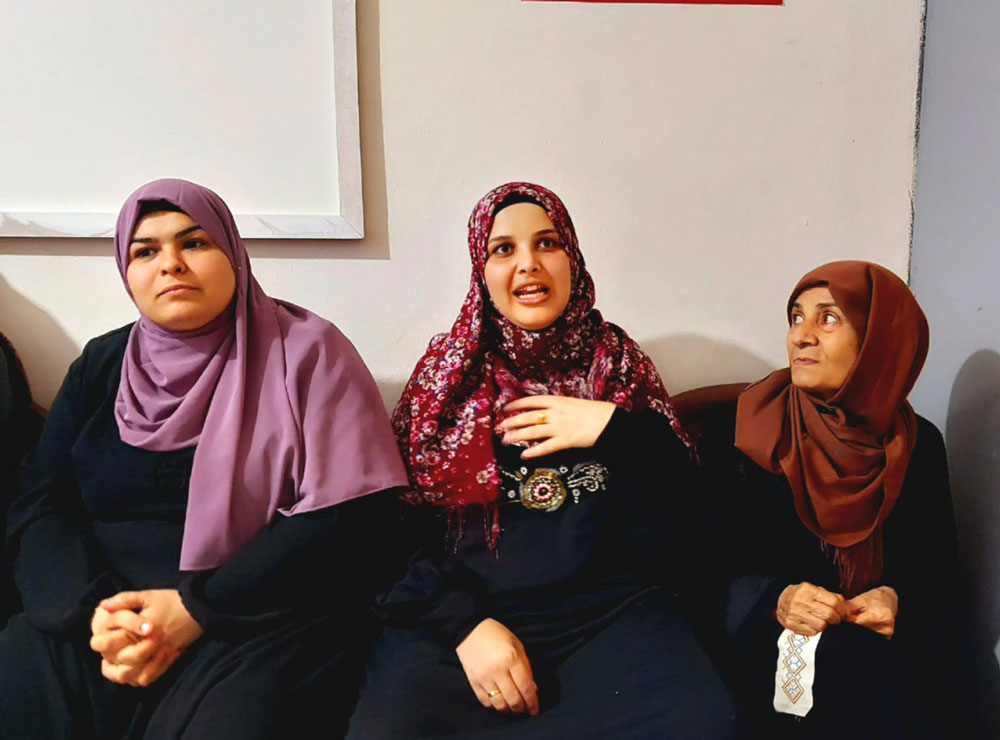 Hiba sharing with the group that she brought a pen with her from Syria, and she writes down her feelings whenever she feels angry. (Photo source: Ruqaiya Takreem)

Every week around 314 women gather in multiple sessions to discuss topics that are relevant to their lived realities. Responding to the question about what they brought from Syria, Hiba shares that she took a pen with her. “I write whenever I am angry. It helps me vent.” This gives a perfect window for Zikrayat to introduce today’s topic of discussion, psychological stress and ways to cope with it. The classes cover a range of themes, including effective parenting, dangers of early marriage, reproductive health, domestic abuse and harassment, basic civil and personal rights, budgeting and family economy, and the benefits and challenges of social media, among many others.

What makes the Alsama mother empowerment courses so effective is that they are always delivered by a woman from the community. Every two months, after training and evaluation, one of the mothers from the group is chosen to lead the classes for the next two-month cycle. This practice has made these sessions productive and engaging, as the participants share more candidly with someone whom they trust. Alsama has currently empowered nine Syrian women to become leaders.

This month, the sessions are being delivered by Zikrayat, the manager of this course. “In the very first few sessions I attended as a participant, I realized that I had the right to stand up for myself in an unhealthy marriage, and I did it! I walked out of an abusive relationship only because I was made aware of my rights and provided social support. I have seen my life transform for the better. That is why I became a leader here so that I can benefit my sisters from this course.” She says that her persuasion skills and comradery are the strongest skills she developed at Alsama.

As a manager, Zikrayat designs the curriculum of the course. “I include only those topics which the women in my class struggle with and could brainstorm solutions for together.” A few weeks ago, the class talked about the right to work for women. It was not a surprise for Zikrayat that many of her students were not aware that they had such a prerogative, so they continued discussing it for a couple of sessions. “Last week I met Yasmin, a student from that group, in a bakery and she told me she had started working there. She convinced her husband who was initially against it; but more importantly, she convinced herself to stand up for her rights,” shares Zikrayat when asked about her biggest achievement. The group has also supported many women to convince their families against marrying their daughter off at an early age.

The sessions have quickly transformed into a safe space for women. In some cases, it is their only chance to leave their homes in the overcrowded refugee camps of Beirut.  Alsama has benefitted 400 women over the last year through this course in both Shatila and Bourj al-Barajneh camps. There is still a long journey ahead and we would love to have your support for this refugee-led women’s empowerment project.