Living a War From Afar 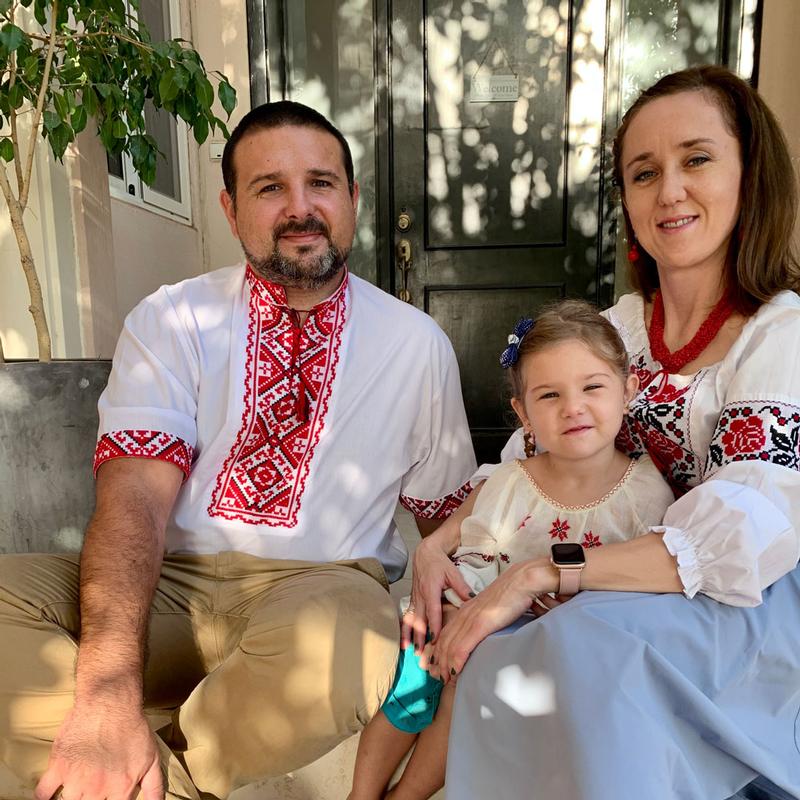 The author and her family in traditional Ukrainian clothes. (Photo source: Inna Polianska)
---------------------------------------------------------------------------------
Like the majority of Ukrainians living in the country, the morning of February 24th did not go as planned for our family who lives thousands of kilometers away from Ukraine. As we woke up to have breakfast, my husband and I engaged in a routine of doing a quick scan of social media pages. To our shock, we saw several mentions on our newsfeed of explosions in different cities all over Ukraine. As it was the early hours of that day and the war new, we frantically looked for further clarifications, which mostly came in the form of comments from witnesses. Numbed, we continued monitoring the news while getting on with our morning routine, waking up our daughter, putting breakfast on the table, getting changed, and going to work, but nothing was a routine on that day or for the next while.

It’s been over 100 days since Russia invaded Ukraine and while we are not directly affected by this war, we’ve been living the horrors of it from afar. War has become a part of our daily routine.

The first few days were the hardest. All I remember is that I tried to keep myself distracted with work. Luckily, working with young students requires complete attention, which provided the much-needed mental breaks. The next two weeks went in a blur. Living as expats, we all know the importance of building a strong community with every new move. During this turbulent time, we developed a greater sense of appreciation for our local community. Our daughter almost didn’t spend any time with us while my husband and I were coping with the initial shock. She was supported and comforted by friends to be fed and entertained away from her dazed parents. We didn’t care about food, but it kept appearing at our doorstep as if by magic. Life carried on without our direct involvement.

During the first two weeks of initial shock, I grappled a lot with the dichotomy of my personal daily life and the life of my family, friends, and home country that I was living through personal messages and my newsfeed. Despite living abroad for over 10 years, our family’s connections with Ukraine remain strong. This is mostly due to the family and friends who are still there but is also thanks to the growing appreciation of what our homeland has to offer over the time that we have been away. In addition, our home in Ukraine is an apartment located in beautiful and vibrant Irpin, 70% of which was ruined by the Russian army during the occupation from late February to the end of March of 2022. Liberation of Irpin was a new goalpost, a gulp of fresh air, the so needed hope and longed “good news.” However, seeing the devastation and anguish that the Russian army left behind sent a second wave of despair.

When the pendulum finally swung back to “not-so-bad news,” I started looking for something to hold on to. This is when I came up with my new motto, “when you don’t know what to do, do what you know,” and leaned into establishing new routines around a new reality. Attending daily jobs is grounding. When at work, I try to pay 100% attention to what I do as much as possible. At times, that’s a job considering that the phone flashes with the persistency of a lighthouse.

What else did I know to do? Help. I started helping people back home directly. Between my husband and I, we know enough people who either have been directly affected by the war or are directly involved in it, and both need help. We also know enough kind, carrying, and empathetic people amongst our expat friends who have offered help. Thank you all! So, we turned into matchmakers that helped save a few lives.

Next on the list was self-care, since we all know where the air mask should go first. I made sure to resume exercising, which started with my lovely Ukrainian Pilates trainer, who also needed a meaningful distraction during her forced relocation with her two daughters.

And last, but not least, we developed a greater appreciation for the small joys of life. Suddenly, cooking turned from a chore to a bonding activity that brought our family together and occasionally other families to our table. A family board game on a Friday afternoon became a lovely bonus and a trip to the sea was a blessing. We may not laugh as often anymore but we certainly do it full-heartedly.

06/22/2022 - Mary Langford
Dear Inna, I am a trustee of a children's art charity in the UK (originally started by a group of international school educators and parents) and we have launched a children's art project that will be exhibited virtually. We welcome any children or young people who want to share their hopes and dreams for Ukraine's future to share their art with us. https://www.ligca.org/ukrainian-dreamcatchers/