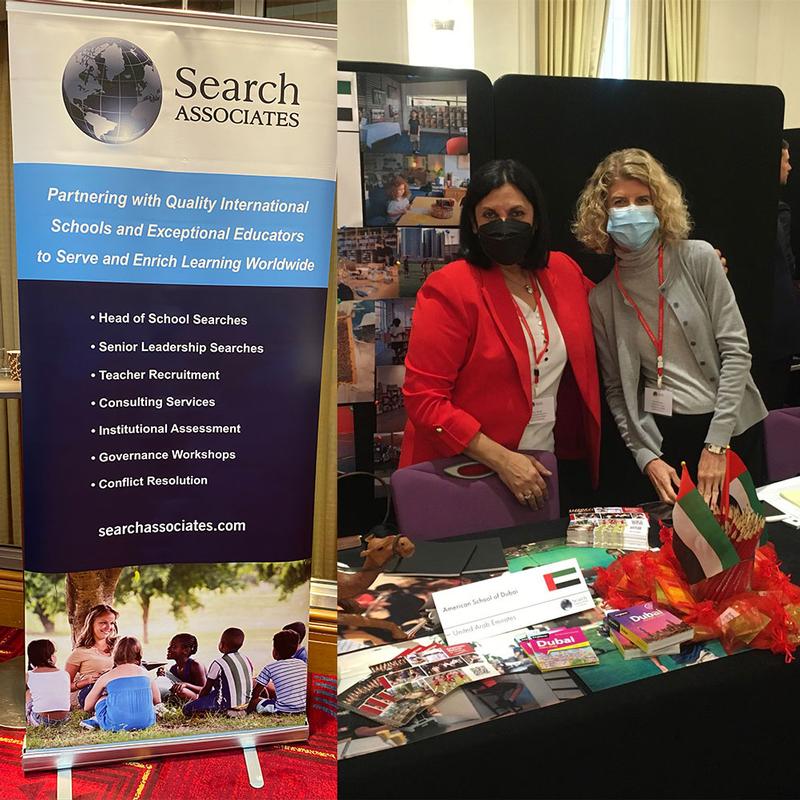 
It was a long time coming and a long time in the making! Finally, on the weekend of February 18-20, the Search Associates UK and Ireland team put together the first in-person recruitment fair that has taken place in London for well over two years.

There was a lot of thought beforehand, first about whether it should be done. Then, the team wrestled with hosting a major fair at a time when many countries still seemed to be in the grip of lockdown, vaccination processes, and isolation. Would anyone show up, and was it the right thing to do? Given that much is done online, would there be a genuine need for it? However, the team persevered with encouragement from member schools, eager to get back to physical recruiting. Those who decided to come would be those who believed it possible and reasonable to hold. Those who did not, would not. The attendees (recruiters and candidates) would be self-selecting, as with most fairs.

With that hurdle over, the team then wondered whether it could be done! Even if London were open for business, what about the places schools would be coming from? What would the requirements on return be? How would we run an event with so many people and be sensitive to the current climate? So, the focus switched from what might be possible to what could be achievable. Think small. Only allow fully vaccinated attendees. Make provisions for fewer contact possibilities. Do as much online in advance as possible. Make use of the extensive improvements to the Search job fair portal to enhance the communication and the fair itself. Provide discreet interview areas in the hotel so that interviewers don't need to use hotel rooms. Hand sanitizer everywhere! Guidelines on mask-wearing. The list seemed endless and the task daunting.

Nevertheless, on the weekend itself, over 125 recruiters representing some 60 schools arrived from locations all over the world to the Hilton, Paddington. So why did they come? They were tired of sorting out if a candidate was a genuine "fit" online and eager for personal contact. Frustrated by time lags during Zoom, Teams, or Skype conversations and the consequent inability to read body language, humor, or get that intangible "feel" for a person were some of the replies from recruiters attending the fair. Nevertheless, the mood was upbeat, a return to some degree of normality after so long without contact. Even when one of the UK's most significant storms in history hit (Storm Eunice), bringing winds of over 120 mph, people were happy to be there. Recruiters told stories of planes touching down on one wheel, diagonally, with cabin staff using the bags in their chairs usually only reserved for more nervous flyers. Road and rail transport to London was cut off by trees falling, power outages, and rising water levels. It all felt strangely biblical, having navigated a pestilence only to be confronted by a flood.

Candidates battled against the odds to make it to London, and some were forced to abandon their trips. One made it in from Norwich (typically only two hours away by train) after an epic 24-hour odyssey. Another told of trains stopping further south than Birmingham and a long wait to share an Uber for over 200 miles at an exorbitant price.

But interviews went ahead! Thanks to the advance scheduling of meetings using the newly updated Search portal, there was less clamor to schedule times at the Saturday morning sign-up. There were no pre-fair candidate or recruiter briefings, all having been done online in advance. Food was provided throughout the event so that no cash handling had to take place, and many new areas throughout the hotel were reserved for recruiter interviews to spread people out.

Despite everything, the event was a huge success. Most recruiters and candidates went away happy to have had the opportunity to meet face-to-face. From a candidate's perspective, the fair gave that unique opportunity to compare schools and recruiters in person and side-by-side by listening to a presentation or speaking with a Head of School. As a result, many walked away with jobs at schools not previously on their radar, impressed by what they had to say in London. That doesn't always happen online. Recruiters, too, were able to get that personal "feel" for a candidate, take time after an interaction, and evaluate the "fit." As a result, many made good hires over the weekend despite reduced candidate numbers due to the storm.

Jessica Magagna, CEO of SEARCH, stated, "It was touch and go for many months trying to sort out whether we could safely conduct an in-person fair. However, it was clear that although online fairs have their place, they cannot replicate the face-to-face interactions that occur at our job fairs. These connections help both our member schools and candidates make the best decisions. I also knew that fair organizers, Peter Smyth, and Dominic Currer, would work tirelessly to make the event a success...which they did!"

It's been a long journey, and we are not out of the woods yet, but the message is clear: fairs are back! Search Associates is already planning a robust job fair schedule for the upcoming recruitment cycle and doing what we do best, partnering with quality international schools and exceptional educators to serve and enrich learning worldwide.