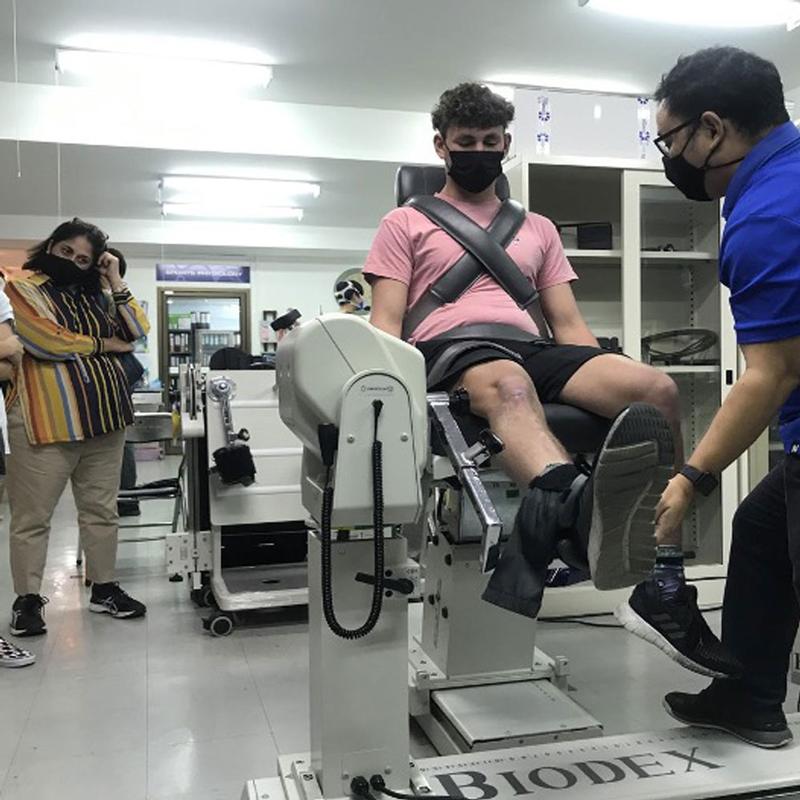 Secondary education students studying both dance & sports science got to explore state-of-the-art facilities at Mahidol University’s Sports Science & Technology College in Bangkok. A small group of International School Bangkok (ISB) students were guided by professors Parunchaya Jamkrajang and Chris Mawinnie as they literally connected their embodied knowledge to the laboratory testing capabilities of motion analysis. The student pictured is jointly studying dance and sports science as 2-year courses within the International Baccalaureate (IB) program of studies. The intensive learning field trip included overviews of the physiology laboratory at Mahidol. Some of the equipment introduced was for biometrics (body mass index, BMI) analysis, such as the DEXA body scanner. Other machines measured force, aerobic capacity and isokinetic muscular strength, such as the Biodex machine included in the photo. Students were amazed at the variety of precise analytical tools that can be used to measure and enhance sport and dance-athletes performance ability.

After a brief orientation, students toured the facilities and learned about basic physics and mathematical equations related to movement analysis applications. The equipment and calculations were all fitting to a typical laboratory setting, but the experiments and research conducted were all focused around the human machine. Students were able to gain first-hand experience with this. One participant was connected to a 3D motion-capture system; she tested force and center of mass (COM) when jumping and landing. Then the group was guided through a review of the computer-generated analytical rendering from the Mahidol professors and PhD research students. In addition, the analysis of applied force and psychology of motivational training were explored. One student strapped in for leg extension / flexion measurements while the Mahidol research student cheered him on. Jordan Nahmias noted, “It was harder than it looked! Even though my leg wasn’t moving at all, I was using all of my muscle!”

The half-day exploration was designed as an introduction to the field of dance & sports science in shared research capabilities with Mahidol’s MA and PhD programs.  With an international focus, Mahidol University boasts high-tech facilities and research collaborations with several institutions in the UK, US, and Australia. Professor Jamkrajang is an active supporter of the international connections in sport science and research, having completed her Doctorate with joint studies in Thailand and Liverpool. Mahidol’s recent program developments include deepening their community integrations and offering their laboratory capabilities to visiting professional teams such as Paralympic Games participants and football clubs. Dance science is a parallel strand of research and among their prospective pathways in future studies.

Motion analysis is a common language between Sports & Dance Science and provides a basis for extended knowledge of applications in VR/AR (virtual reality, augmented reality) developments as well. Many of the computer-generated images and analytics used as improvements in performance for dance- /sport-athletes are being applied to software development in making the VR/AR experience more “human-like”. So, laboratory and research studies such as those undertaken at Mahidol could be key contributors in future applications within several movement-based industries.

Currently, there are research proposals in process for joint studies on jump-landing and balance capabilities in sport-athletes vs. dance-athletes. In addition, there will be elements investigating how interventions of mindful imagery and cuing affect physical performance during the jump-landing study.

Jaleea Price is an international educator in Bangkok who’s enamored with movement, analysis and technology integrations.