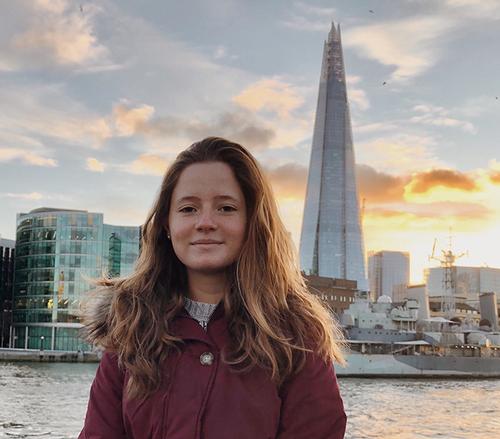 My forehead was pressed against the cold window of the car. I looked up at the gray sky and tears rolled down my cheeks. Everything was wrong. The color of the sky, the streets I drove past, the faint smell of fish that lingered in the air. I started fantasizing about how I could make my escape. Perhaps I could splendidly jump off the car and hitchhike my way to the airport, and then, somehow, go back home, back to Bogotá. My chaotic fantasies were cut short by the loud honk of a passing minibus and evoked in me a single terrifying thought; today is my first day in a new school.

I will hate it here. I will hate it here. I will hate it here. I kept repeating these five words to myself, partly so as not to give my parents—who had coerced me into being here—the satisfaction, and partly because I wanted to prepare myself for the possibility that it might actually be true. My feet dragged heavily behind me as I was herded into the Elementary School Office by my parents. I walked through the doors of a two-story red, white and blue building, and the moment I saw other adults glaring down at me with a grin plastered on their faces, a shiver went down my spine. We were promptly greeted by the Primary Principal, who invited me to take a seat on a couch—that must have been older than my parents—while she spoke to my parents privately. As I sat on the elderly couch, I noticed that behind me, there was a map, that stretched the length of the wall and displayed the faces of students. Each face was connected to a different country on the map by a red piece of string. Above, read the words International Students. I gawked at the faces on this map, at the foreign and exotic places some of these faces seemed to come from. Maybe these would be my friends. They certainly understood what it was like to leave a life behind and be forced to live in a strange place. Gently, I ran my finger across the soft pieces of red string and landed it on Colombia. Would this be all that connected me to my once home, a red piece of string hanging on the wall of a school office? Just as I felt my heart sink, as I reminisced about all I had left behind, I felt a hand on my shoulder. It was time to go to class.

As luck would have it, just as I chained the straps of my backpack to my shoulders so that the Principal might escort me down the cold halls of the building and lead me straight to my death—sorry—my new classroom, a blonde girl came into the office asking for a late pass. This girl was apparently a member of the new class I would be joining and would now be escorting me herself. I glanced at my parents for the last time; I wanted to seem angry, and yet I think all I managed to show was fear. The girl seemed hurried and impatient to get to class. She walked fast and aggressively, and I followed shyly, closely behind her. I remember thinking how awkward and desperately long the silence between us was. No words were exchanged, no eye contact was made; I simply followed in silence. Before I could brace myself, she was opening a door and walking inside it as if she had been doing so her entire life. I lingered briefly behind until the teacher noticed me and pulled me inside her classroom. This is Alex. She just moved here from Colombia. Silence. I could feel everyone’s eyes on me, and yet I kept mine locked on the floor. Before the teacher could say anymore, or even worse, ask me to introduce myself, a bell rang, and the once still classroom suddenly became chaotic. The loud clanking of chairs being pushed in and the chatter of students echoed through the classroom as everyone began to make their way into the hallway. I followed my classmates to the very end of the building, and as I walked I recognized someone, one of the faces on the wall, connected by a red string to Mexico. Maybe it was because she knew what was going through my head, or maybe because of how forcefully I was unintentionally staring at her; she approached me, and before I knew it, we were sharing each other’s lives. Other girls joined the conversation, and I slowly began feeling less like an intruder and more like an insider.

The first class I attended that day was art. I walked into a room that smelled of fresh paint, humidity, and glue, and whose walls were covered in every painting, ceramic, and paper maché I could imagine. I joined my classmates at a large wooden table as we awaited the teachers’ instructions. The art teacher sounded like a woozy happy magician, which for some strange reason I found comforting. She instructed everyone to resume the work they had been doing in previous classes, and then, as everyone left their seats and I remained still, she noticed me. She explained we were making alebrijes, carved and painted Mexican figurines that represent spiritual guides in the afterlife. She told me to make an armadillo. I didn’t know it at the time, but the armadillo is known as the lone traveler, so it really was a quite fitting choice.

I don’t remember what other classes I attended that day, but I remember my lunch break. The school bell rang loudly and everyone rushed out the classroom door, eager to savor every one of those forty-five minutes. My new Mexican friend, Ximena, stayed behind and helped me navigate through the jungle that had become the halls of the building. Down some stairs and across the alameda was The Blue Toldo. It was a volleyball court turned cafeteria, lined with four rows of tables where students would sit to enjoy their lunch. We sat next to some girls in our class. They ate quickly, and therefore so did I. At this age, the line at which it is no longer cool to use the playground during lunchtime is fast approaching, yet not quite imminent. So having finished our lunch, we all sprinted towards the exciting structures that stood before. Just as my feet were about the gently land on the sandy surface of the playground, I was caught in the arms of a vigilant teacher. No hat, no play she said. These four words would continue to torment my lunchtime adventures for all the time I spent in Elementary School. I don’t know why I hadn’t noticed before, but suddenly all the children that ran, jumped, and played before me were wearing the most unfortunate hats atop their heads. A beige, floppy fisherman hat that could cover your entire head. Sure, you were protected by the sun, but at what cost? As I stood in wonder at this unjust rule, Ximena took my hand and rushed me to a tall cabinet in a dark corridor. The Lost and Found, where I would find a hat whenever I was in need of one. After a quick search, we found a hat that seemed adequate, I buried my head into it, and we were off.

I will love it here. I will love it here. I will love it here. This is what I repeated to myself over and over as I gathered my things and began walking towards the exit where my parents were eagerly waiting for me. I felt happy, and excited to come back tomorrow and the day after. Never could I have imagined I would’ve met so many interesting, diverse and welcoming people during my first day. Almost intuitively, I could feel that Roosevelt was a place where I would thrive, a place I would never forget. I opened the door to my car and got in. How was your day? they both asked almost simultaneously, one more fervid than the other. Horrible, I responded coolly. I would not give them the satisfaction.

As my last day at Roosevelt approaches, I remember every moment and individual that I have come across these years with nothing but love and gratitude. That day, my first day, is one that I will never forget, because it was the beginning of some of the best years of my life. Roosevelt has been like a second home to me, and I cannot put into words how thankful I am to everyone who was part of my life. From time to time, I think of my younger self, looking up at Lima’s iconic gray winter sky, and now realize it was never really gray. Not even a little bit. Not even at all.

Alexandra Bates is a graduating senior at Colegio Franklin Delano Roosevelt, The American School of Lima in Lima, Peru.