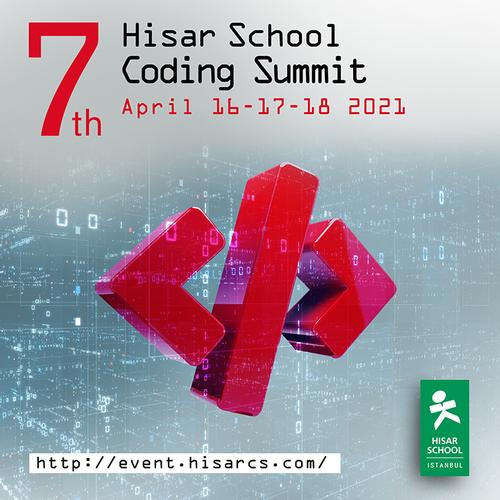 Programming courses for all students

Hisar School continues to provide training activities to students across Turkey in line with their "open source" philosophy. Students interested in software were introduced to the world of coding with free public courses as part of the "Hisar Coding Summit."

Organized for the 7th time this year and attended by more than 1,400 students to date, the summit offers courses and workshops in a variety of fields such as artificial intelligence (AI) technologies and application, and game development.

The key aspect of these courses is that they are taught by the students of Hisar Schools under the guidance of their teachers for the purpose of strengthening peer solidarity. At this year's summit, leading experts from Turkey and across the world have also met students and shared their experiences with them.  52 and 26 schools, universities, and companies from Turkey and around the world, respectively, as well as more than 600 students have attended to the event which has been organized online for the second time this year.

Being one of the crucial professions of the future, software influences all the business fields of today's global world. In line with the increasing demand for software developers in our digital world, software is becoming one of the promising areas encouraged in Turkey. Starting to learn software from an early age is crucial for gaining experience and becoming skilled in this field and obtaining better career opportunities. Acknowledging the need to cultivate young people who are competent in the field of software, Hisar Schools have organized the "Hisar Coding Summit" for this purpose for the last seven years.

Nearly 1,400 students have become acquainted with programming over seven years

This year, students interested in software have been introduced once again to the world of programming with free public courses as part of the "Hisar Coding Summit." Organized online  due to COVID restrictions and attended by more than 600 students from Turkey and other countries, 14 courses and workshops in total were offered in a wide range of fields such as AI technologies as well as application and game development. The key aspect of these courses is that they are taught by the students of Hisar Schools under the guidance of their teachers for the purpose of strengthening peer solidarity. At this year's summit, leading experts from Turkey and across the world met students and shared their experiences with them.

The program for the event, held online on 16-18 April, included a variety of activities as well as guest speakers. With courses grouped into clusters of three, students had a chance to develop their analytical thinking skills. Thanks to these courses, students were able to gain skills in a wide range of areas, from website design and game development to music programming and AI. After the completion of courses, speakers from organizations such as Microsoft, Google, and Stanford, who are experts in the areas of AI, technology & human interaction, and the use of AI in biology, among others, addressed student participants. As part of the event, speeches were made in Turkish during the day and in English in the evenings.

Entrepreneurship 101: From Idea to Market

Introduction to Programming with Scratch

Pygame is a game development library to be used with the Python programming language. Thanks to Pygame, users can develop their own games and improve their Python skills. In this course, we will develop games such as Rock-Paper-Scissors and Tetris by using the Pygame library and build on the subjects of the previous Python course with additional skills such as object-based programming.

In this workshop which combines design and coding, students will be introduced to the basics of coding and application design with the use of Swift. Students will also look more closely at the programming language developed and used by Apple and have the opportunity to develop an application via Swift at the end of the workshop.

GAME DESIGN AND DEVELOPMENT WITH UNITY

Unity is one of the most widely used platforms for game design and development. In this course, students will learn the basics of design and programming and develop a simple game.

Sonic Pi is a platform which enables you to compose all kinds of music to the smallest detail and can be used even at live concerts. In this course, students will be able to compose their own music and learn programming, which will help them to get the computer to compose by itself at the end of the course.

React Native is a mobile software framework created by Facebook. This system enables you to develop software on IOS, Android, Apple TV, Apple Watch and many other systems simultaneously by using a single programming language.

Autodesk Fusion360 is one of the computer-aided design programs currently used by many companies. In this course, students will learn how to design a product by using 2D and 3D design features of the program.

Java is a programming language which has been at the top for many years, still being very popular. It is also ideal, among others, for introduction to programming with its simple interface. In this course, we will provide a quick introduction to Java and address features necessary to be known by all users as well as data types, methods and many others, helping our students to develop their first game afterwards!

OpenCV is essentially a Python library used for real-time image processing and computer vision. In this workshop, we will look at different methods and functions of the library and review its various usage areas and methods.

In this workshop, students will be introduced to HTML and CSS and learn how popular daily websites were created.

This workshop will provide an introduction to AI and machine learning algorithms which have been at the center of research lately. During the workshop, students will learn the logic behind machine learning concepts and have a chance to develop their own applications. We will also look at the mechanism of audio communication which is a key part of human & computer interaction.

ENTREPRENEURSHIP 101: FROM IDEA TO MARKET

In this applied course on entrepreneurship, participants will study brainstorming techniques as well as methods for finding a potential startup idea. At the end of the course, everybody will have designed their own product in line with these criteria.