By the Office of Overseas Schools
30-Sep-20 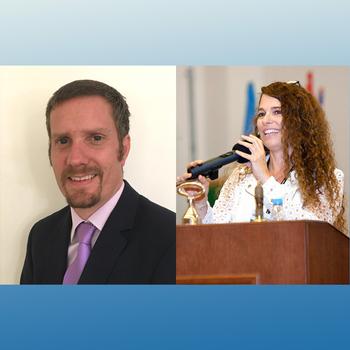 The U.S.-based National Association of Elementary School Principals (NAESP) established the program in 1984 to recognize and celebrate elementary and middle level principals in the United States, who set high standards for instruction, student achievement, character, and climate for the students, families, and staff in their learning communities.

From the beginning of the Award program, two outstanding principals have been selected from the international schools that are assisted by the Office of Overseas Schools of the United States Department of State. Schaub was nominated by Dr. Sean Areias, Director of the American International School of Lagos during the 2019 – 2020 school year and selected from among several nominees. Todd's nomination was supported by the Director of the school, Simon Gillespie, at the International School of Uganda, and selected from among several nominees.

Ms. Schaub has many notable accomplishments. In each of the administrative positions she held, she worked on building capacity in teachers as designers of quality standards-based teaching and learning. Ms. Schaub also cultivated a data-informed, assessment culture for learning; "It causes learning rather than catches out those who haven't learned." And perhaps most importantly, Ms. Schaub led the transition to remote learning during the COVID-19 crisis. Of this challenge she said "We are all in this together. By keeping our shared vision clear and celebrated—to offer high quality education to our students—we are inspired every day to learn and keep their learning thriving."

Mr. Todd earned his Bachelors of Science (Honors) from the University of Warwick, Coventry in the United Kingdom and a Masters in Education Leadership from the University of Bath, in Bath, also in the United Kingdom. Mr. Todd has spent the last decade and a half working at the International School of Uganda serving as an International Baccalaureate (IB) Primary Years Program (PYP) Coordinator, a Dean of Studies, a Director of Admissions, a College Counselor, an IB Middle Years Coordinator, a Junior School Assistant Principal, and now Junior School Principal. Mr. Todd has also been heavily involved with the IB organization serving as a speaker as global conferences, an online facilitator and as a workshop leader/school visitor.

Mr. Todd has many notable accomplishments, shared leadership being one of them. In his application for this award he said, "I have always believed in leading with others and so my greatest accomplishment has been leading with others as we have transformed the Junior School." Learner empowerment, fostering and honoring each learner's innate ability to grow has also been one of his areas of focus. Last but not least of his accomplishments, "...our journey towards inclusion over the past three years has changed who we are and what believe in... our parents, students and faculty have all developed in their understanding of humanity, of ourselves and what we can do to model and be the kind of community we are all striving for in this world."

“Principals have rightly earned the reputation as the most trusted group of leaders," said Executive Director of NAESP, Dr. L. Earl Franks, CAE. “It is because even during times of uncertainty and challenges, such as sudden school closures due to the rapid spread of COVID-19, principals are on the front lines, relentlessly striving toward educational excellence and wellbeing for each child in their care.”

This school year, Ms. Schaub and Mr. Todd will travel to the United States for activities planned to honor and bring well-deserved recognition to the elementary and middle-level educators chosen by the states, the District of Columbia, private schools and the Office of Overseas schools.

04/19/2021 - Gina J
Extremely proud of your work, Ms. Schaub, and your innovative efforts to share the joy of learning with everyone. Bravo!