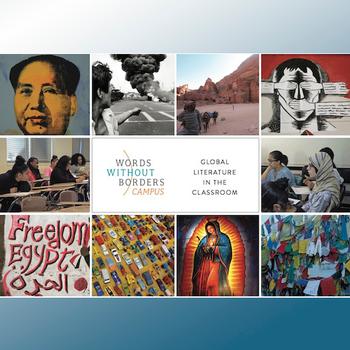 Educators now face unprecedented challenges. Soul-searching and outcries for justice demand long overdue reforms of curricula and of classroom practices to confront racism. At the same time, we must work to combine and integrate these reforms into more online teaching caused by the COVID-19 pandemic across the globe.

Teaching literature-in-translation, especially by contemporary writers, is one way to approach expanding diversity in both what and how students learn. This is one of the primary missions of Words Without Borders Campus, the public access education project that evolved from Words Without Borders, the online magazine which, since its founding in 2003, has published more than 2,500 stories, poems, essays and features translated from 122 languages from 139 countries.

I serve on the Words Without Borders board, and for the past six years, as Education Chair, I’ve been helping to steward the Words Without Borders Campus site. Edited by author and education specialist, Nadia Kalman, assisted by Executive Director Karen Phillips and the WWB staff, the site organizes themed units of literature in translation aimed at the first two years of college classrooms and at junior and senior levels of high school.

Free of charge, teachers can use a whole country-based curriculum, a themed unit, or single text, supported by teaching resources. So far, WWBC offers curriculum organized around six countries: China, Egypt, Iran, Japan, Mexico, and Russia. Scheduled next year are new units from South Korea, to be followed by non-anglophone West Africa.

The site currently counts 893 educators from around the world. In 2018, WWB-Campus earned honorable mention for the “Innovations in Reading Prize” from the National Book Foundation, a rare distinction.

Words Without Borders Campus has responded to the current historical moment by posting additional classroom resources to fight racism, xenophobia, and social injustice on its weekly blog feature. These include Sandrine Kao’s story “The Park Bench” (translated from the French by Jane Roffe) that poignantly confronts anti-Chinese racism and xenophobia; and Marco Avilés essay, “I Am Not Your Cholo” (translated from Spanish by Sophie Hughes) about the racism facing Lantinx immigrants that references directly James Baldwin’s lifelong fight for civil and human rights.

From 2014-2016, Words Without Borders Campus completed a beta-testing phase in 75+ classrooms, one of which I taught at UNLV, ranked among the top three most diverse campuses in the United States. My students represented this diversity. My course was designed for a full semester, organized around units from Mexico, China, and Egypt.

From the Egypt unit, writing full of subtleties based on religious customs stimulated  discussions of the nuanced contexts of Islam and its social influences, especially through reading “The Veiler of All Deeds” by Hamdi Abu Golayel—a tale of seduction, betrayal, and revenge involving a corrupt businessman, a cleric, and a neighborhood. Within events of the Arab spring, we explored nonfiction and graphic fiction linked to news reports, videos and commentaries. We also discovered pioneering women writers. We learned in a memoir by Miral Al-Tahawy?the first Bedouin woman author to emerge from the region?and through feminist poetry by Iman Mersal, how the Arab spring has been not only a movement for political rights but for women’s rights, too, thus three strong social justice themes emerged from the unit: human rights, women’s rights, and the struggle for freedom of expression.

Units from China focused on recent history, including how the era of “openness” (1980-2012) may have been a reaction to the 1966-76 Cultural Revolution, explored through poetry by Yu Jian and fiction by Yu Hua. The current regime’s repression and hard-liner return to Maoism under President Xi Jinping may be in part comprehended in this context—many of China’s leaders survived abuses during the Cultural Revolution, so uncontrolled political and mass movements are anathema to them. We also examined the 1989 Tiananmen Square movement and its brutal repression as well as other prohibited topics in China, causing students to appreciate the values of free expression and democracy.

Exploring translation opens up awareness of how language shapes our worldview. One very unusual student for his diversity and background—an African-American-Japanese raised mostly in Japan who had studied both Japanese and written Chinese—came alive in our class in ways he hadn’t shown before, leaping to the white board to draw out examples and explain how he reads a language in characters. Our class shared and appreciated this flowering of his identity.

One of the most controversial issues Words without Borders ever published is on “The Mexican Drug War”. One of the units for Mexico is organized around this disturbing theme. Before this, our class studied “Leaving Home” and its heart-wrenching issues of immigration through poetry by Fausto Guardarrama López and fiction by Aura Estrada. (This theme has expanded since to include an excerpt from the impressive first novel by Aura Xilonen, The Gringo Champion, that tells the story of the young protagonist’s escape from an ICE raid). We sampled the folklore and beauty found in indigenous writing translated from the Purépecha and Mazateco languages. We learned about Mexico’s history and art, and about the variety and complexity of Mexican diversity spread out across the spectacular mosaic of its geography.

For the unit on the Mexican Drug Wars, with its shocking realities and crimes, I was apprehensive that such traumatic readings might cause the class to dead-end into numbness and pessimism?not at all the influence Words Without Borders Campus intends. I should have known better. Informed by the sharing of a first generation Mexican-American in our class, my students found alternative truths about this hard subject, not so much about the “war” as about how Mexico and its people are struggling daily to come to terms with an established narco-culture taking over its society. The story of popular resistance, and of the movement to demand justice for the victims from Ayotzinapa?the September 2014 disappearance of 43 students of the Ayotzinapa Rural Teachers’ College on their way to demonstrate to support their impoverished school?became the story my students wished to pass on and carry back to their communities.

Increased awareness of the world and of its diversity should be among the top concerns of education in the twenty-first century. Failures to confront racism, and the rise of extremist nationalism and xenophobic populism not only in the United States but across the world, might in part be blamed on how a generation of educators have failed to teach enough awareness of other voices, other languages, other cultures than those of a predominantly white majority.

Words Without Borders Campus aspires to be part of correcting this failure. The site also offers resources and tools for transitions to online education caused by the COVID-19 pandemic. The site teaches a more informed self-awareness, especially for students who discover their first texts from the language and country of their heritage, which can affirm and empower them. As one pilot class student from La Guardia Community College in Queens, New York, described the effect of his reading across cultures so aptly: “It prepares you for life.”

Douglas Unger is Director of the Creative Writing International Program at the University of Nevada.