The Climate Is Changing so Why Aren’t We? 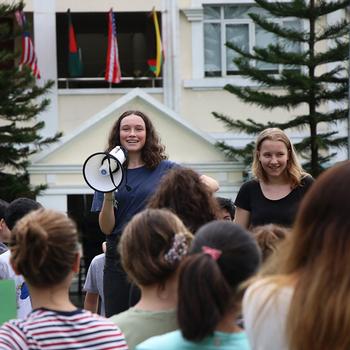 Student climate activists globally are making their voices heard. Their urgent call to action, when it comes to climate change, was sparked most recently by the voices of Greta Thunberg and Luisa Neubauer. They woke up political and corporate leaders globally by saying, “Enough is enough!” They got their message out through their Fridays For Future protests, school strikes for the climate movement. Students of the International School of Yangon (ISY) Eco Schools Team rose to this challenge on 20 September 2019 by organizing the first-ever protest at ISY, which created a platform for speaking up about climate action. The team said that they organized it to show how even a “small community in Myanmar can participate in a global movement.” This platform allowed ISY students to highlight their main concerns about our school’s contribution to climate change. Students from middle and high school, along with a few primary student activists, joined together and marched around campus, shouting slogans such as, “What do we want? Climate action! When do we want it? Now!” and “The sea levels are rising, so are we!” All participants were determined to create an impact, not only at ISY but to also bring awareness on a global scale about our actions that negatively impact the environment. At the heart of the Fridays for Future movement lies Global Goal 13, Climate Action, which states “Climate change is a real and undeniable threat to our entire civilization” (globalgoals.org). Students striking instead of going to school aim to spread the message of “Why spend a lot of effort to become educated, when our governments are not listening to the educated?” (from Fridays for Future website). ISY students becoming part of this movement have brought a level of awareness to our community and initiated plans of action we as a school can start working towards. Eco Schools Team leaders emphasized the importance of eliminating single-use plastics on campus, through means such as petitioning for banning bubble tea orders, since they abundantly utilize single-use plastics. Another plan of action deals with the usage of ACs in our school buildings and the practice of regulating them to temperatures of 25 degrees Celsius and above. Charlotte Rickert, Grade 10 student and president of the Eco Schools Team, was interviewed by Global following the strike. She stated that, “I can say that we are working on making ISY more ecofriendly, including imposing AC regulations and plastic bans. But until we actually get that through to the ISY board of directors it will be the students’ responsibility to not bring any plastic on campus.” Charlotte emphasized the importance of student initiative when it comes to striving towards environmentally friendly habits. When asked about future plans for the Eco Schools Team, she responded, “We are working on making ISY a certified Eco School, through a seven-step plan that will take two years involving forming an eco-committee, surveying the school on sustainability, correcting any mistakes to make ISY as eco-friendly as possible, and more. Once we have established the committee and finished the surveys, we will focus on other environmental issues ISY has for the rest of the year. This is because the Eco Schools certificate cannot be achieved all at once.” Anna Joicey, another student leader of the Eco Schools Team, called out from a megaphone to the 80+ students who joined the climate strike saying, “Thank you, thank you so much for coming. Without you guys here, the strike would have never happened!” She marveled at the number of participants, stating “I wasn’t expecting as many people to join as they did, and it went pretty well overall. I think we got our message across.” All Eco Schools Team members were grateful for the outcome of the strike and hope to see students who were unable to join this time, in forthcoming strikes. ISY’s first “School Strike for Climate” paves the way for future action not only at this school but across others as well. It sparked interest and inspiration within students to act upon this global issue as there’s no time for waiting—the future is now. Global is the International School Yangon’s student-led news media team that informs and celebrates the compassionate service learning projects happening around the school.

Charge to Change: A Student's Simple Yet Powerful Innovation
By Ahaan Chakrabarty Mar 2021