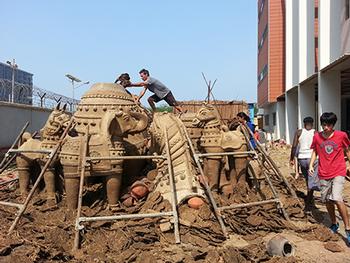 Last year, the American International School-Chennai, came together and engaged in a magical collaborative project that impacted a community in ways we could never have anticipated.

On the morning of 10 February 2014, in a village-style performance, Thappattam dancers moved to the increasing rhythm of the drum. The entire AISC community was seated outdoors on the ground, close to a ring of earth in the shape of a horseshoe, taking in the performance while anticipating what was about to come.

“The Horses Are Coming,” was the mantra over the previous weeks, heralding an artist residency program that was about to commence at the school. The Visual Arts Department had arranged to bring seven artists from a village located in the town of Villianur to our school to construct several monumental figures that would eventually become permanent fixtures on campus, including four horses and one elephant. V.K. Munusamy, a UNESCO award recipient from 22 generations (1,400 years) of Ayyanar Horse construction, was selected to lead the build.

The Ayyanar Horse is a Hindu symbol for protection. These large horses can be found flanking the entryway to villages and temples throughout southern India. Tucked away in remote locations, they have become all but forgotten. It has become economically challenging for Munusamy and other artists who were raised to build these majestic figures. Many have moved on to produce more viable, small-scale commercial figures and pottery. In an attempt to bring international awareness to this process and preserve the tradition, we launched “The Ayyanar Horse Project” at AISC.

Following the Thappattam performance and a very powerful puja, the artists laid out the first coils that would define the hooves and feet for each of the figures at three different workstations located in high-profile locations around campus. With each additional coil, animals slowly began to emerge from the earth, reaching higher and higher with each passing day.

A community, engaged in a project of historic proportion, would soon become forever changed. School-wide interdisciplinary instruction coiled its way through our campus like a thread, linking content areas from Pre-K through Grade 12. Authentic learning surrounding a shared concept quickly emerged, leading to a rich organic curriculum that swept across our campus.

The social interaction between our community and local artists led us all to recognize and embrace the power of communal efforts, authentic experiences, and global mindedness, while reinforcing the importance of preserving traditions. In struggling to deal with the pressing issues we face daily in the 21st century, it is easy to lose focus. In the end, we are all from villages, ranging in size, searching to find balance in our complex lives. It is only when we get back to the basics—the simple things—that we find the happiness that many spend their entire lives seeking.

Beyond the interdisciplinary instruction and self reflection that took place throughout campus, over 400 Ayyanar figures were constructed from over 25 tons of clay, ranging in size from a couple inches to our largest, which stood at 16 feet tall. Utilizing all of nature’s elements—earth, air, water, and fire—together the AISC community reconnected with the earth and digested a process that is on the verge of extinction, becoming ambassadors for its preservation.

In September of this year, the last of the figures was installed on campus. Although the horses have finally arrived at AISC, the Ayyanar Horse Project will live on as we continue our efforts to bring international awareness to this traditional process, making sure that it is around to be experienced by generations to come. It will also live on in spirit, in the hearts and souls of those who experienced the magic that the horses brought to an international school in southern India.

As numerous student-led service projects begin to emerge to support the needs of an artist village located in the town of Villianur, we are reminded of the power of authentic education and the importance of modeling the desire to be the change in a world that so desperately needs our involvement.

The Horses Are Coming!

Prototyping During the Pandemic: The PLA
By Marina Gijzen Jun 2021