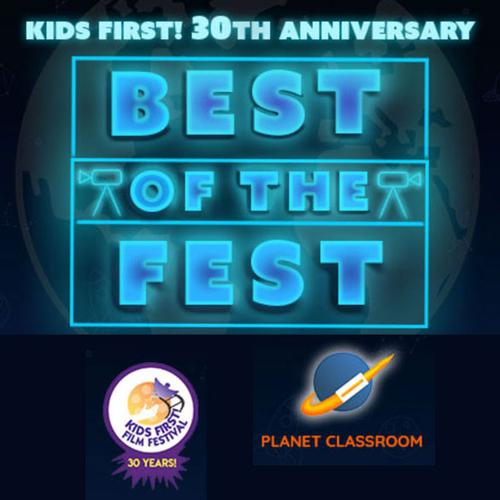 KIDS FIRST! BEST OF THE FEST features on Planet Classroom Network will focus on topics including Climate Change, Inclusivity, Mental Health and Wellness, and Girl Power.

“There are so many different elements that go into making a film,” said KIDS FIRST! Founder, Ranny Levy.  “When kids participate in either the creation or the marketing process of a film, they learn valuable life skills including problem solving, critical thinking, collaboration, and pitching.  They gain the self-confidence to express an opinion that they can debate with their peers.”

“We at Planet Classroom believe that quality storytelling is the most powerful way that young people can share ideas that inspire positive change,” said Cathy Rubin, Co-founder of the Planet Classroom Network. “Now more than ever is the time for youth media makers to help us rethink a world in which all peoples can flourish.  We are delighted to join forces with KIDS FIRST! to celebrate incredible stories that focus on some of the most important global issues of the moment.”

BEST OF THE FEST Press Kit

KIDS FIRST! Film Festival is an initiative of the non-profit Coalition for Quality Children’s Media founded in 1991 whose mission is to teach children critical viewing skills and to increase the visibility and availability of quality children’s media.  KIDS FIRST! Film Festival is a showcase for new and classic children’s films from independent and student filmmakers worldwide in addition to select studio films.  Visit the website

The Planet Classroom Network, organized by CMRubinWorld, brings together musicians, dancers, video game creators, filmmakers, learning innovators and emerging technologists from around the world to entertain, educate and engage youth, and to provide a rich cultural experience for all. Content showcased for youth and by youth on the Planet Classroom Network is provided by 29 cultural organizations from around the world. Young people globally played a significant role in conceptualizing, creating, and producing the network’s vision and programming.  Visit the website

Why Don't Fun and School Align for Many Students?
By Mealea Mang, Age 15 Nov 2021