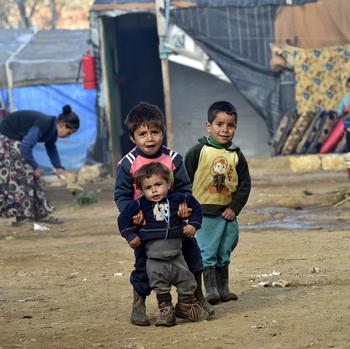 Out of the 60m people who have been evicted from their homes due to persecution and conflicts worldwide, at least half are children. These young refugees have complex mental health needs, predominantly emotional difficulties such as post-traumatic stress, depression and anxiety which are compounded by physical ill health, developmental delays, social exclusion and lack of education.

Refugee children are very vulnerable to extreme poverty, exploitation, abuse, neglect and parental mental illness. They can also struggle to adjust to their host country or environment. These risks are even more pronounced for unaccompanied minors and former child soldiers.

In recent years, there has been growing interest in understanding how different factors in a child’s environment can protect their well-being by building resilience to process their distress and cope with further stress. Interventions to improve children’s psychological well-being and social functioning have been broadened from just helping the child deal with their traumatic experiences to also strengthening support for their family, school and communities.

So far, most of the evidence about how to help comes from studies with refugee children in high-income countries, with limited knowledge on how we can help them in societies with sparse specialist resources. This is the current focus of research that I am involved in, with a number of studies and training programmes in different countries and contexts.

Refugee children usually move with their parent or parents, although many are on their own because of parental death, or because travelling alone was the only way of escaping conflict in their home country.

Systems and settings vary. Some children are living in refugee camps in Jordan, Lebanon, and increasingly in Greece; others in reception centres, often in unsatisfactory conditions; while others are living independently in the community. In Turkey, 200,000 Syrian refugees live in 20 camps near the southern border, while the remaining 2.5m move of their own accord around the rest of the country. So programmes to help the mental health of children need to be adjusted to these different situations.

During the last 15 years we have been investigating the impact of the ongoing conflict in the Palestinian Territories on children’s mental health, particularly on the protective role of family and support networks that can moderate the impact of trauma on children. We are currently exploring how these strategies can be used to help Syrian children in Turkey, internally displaced Libyan children, and victims of ethnic violence in Kenya.

The emerging findings and training initiatives in low- and middle-income countries have led to the establishment of the World Awareness for Children in Trauma programme. We are developing a comprehensive psychosocial model for refugee and other children who suffer complex trauma, which can be used by non-governmental organisations (NGOs) staff and volunteers, as well as other agencies operating in crisis or post-disaster areas.

The priorities are to ensure the safety of environments where children live and the development of child protection policies and systems. Caregivers such as refugee or orphanage staff require awareness training on how trauma affects children and how to recognise symptoms of abuse and exploitation. For example, when children have aggressive outbursts, staff should manage these behaviours in a nurturing and not punitive way.

One adolescent living in a slum area in the town of Nakuru, Kenya, who had been displaced during inter-ethnic violence in the country, told our researcher Elijah Getanda that “we need to have a life skills class”, and good advice on how to control periods of low and high self-esteem.

In post-conflict situations in countries such as Indonesia and Burundi, several successful programmes have been implemented through schools and communities to help refugee children adapt positively to their new lives, even in the face of uncertainty. Several adolescents who took part in our intervention in Kenya’s Nakuru slums have since returned to school.

The next level is to provide children with opportunities to understand and cope better with the sources of their distress through creative techniques such as drawing and music, writing, talking, or play. These can be facilitated by trained non-specialist staff such as teachers.

When trying to help young refugees deal with both the trauma of their past and the uncertainty of their future, there needs to be collaboration between NGOs, the state and schools to make sure that nobody gets left behind.