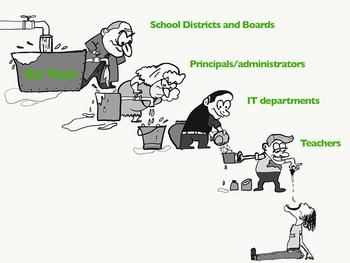 “The real difficulty in changing any enterprise lies not in developing new ideas, but in escaping from the old ones.”

“Trickledown EdTechonomics” is what I call the unstated theory driving EdTech administration in the majority of schools. The essence of Trickledown EdTechonomics is the belief among school districts, boards, and their administrations that by sheer virtue of the fact they have invested in educational technology, a school can and will realize a sizable, positive effect on student learning.

The flipside of the Trickledown theory is the more recognizable face of EdTech. It’s the grassroots group of teachers, coaches, integrationists, and other true believers connected to one other via a stream of hyperbolic digital chum being tweeted, retweeted, and pumped through newsletters, websites, and social media accounts. I call this the “EdTecho-chamber.”

Despite the cacophony of #gamechangingedu! in the EdTecho-chamber, Sonny Magana, EdTech grand sultan, in his new book, Disruptive Classroom Technologies, says that “the preponderance of evidence suggests that the effect of digital tools on student learning is downright dismal.”

Teaching strategy efficacy guru John Hattie blurbed Magana’s research for the book. He said of over ten thousand studies done on computers in education, the average effect on student learning is not only low, it hasn’t changed in the past 50 years despite the explosive growth in EdTech. Hattie praised Sonny’s work as significant, and then said for it to work would “require a revolution—asking teachers to reduce their emphasis on the ‘Tell and practice’ model and inviting and teaching students to be more involved in planning, teaching each other, and evaluating their impact on the three levels of learning.”

Hattie’s idea about the need to change our vision of what makes good teaching and learning is spot on. But singling out teachers as the impediment to progress in EdTech is irresponsibly glib.

The Learning Management System provider Schoology reports that in 2016–2017, in a study of 2,846 education professionals in 89 countries, less than 40 percent of them worked in schools with dedicated technology integration professionals.

According to internal statistics at Clever, 70 percent of the school EdTech accounts they connect and manage for schools are never activated/accessed.

The ECDL Foundation, an international organization “dedicated to raising digital competence standards in the workforce, education, and society,” concluded in their 2016 study that a significant portion of all age groups—including the generation that supposedly grew up “digitally native”—more often than not lacked even the most basic computer skills. In fact, in 2017, Teaching and Teacher Education published a piece of research called “The myths of the digital native and the multitasker,” in which the authors conclude that the oft-cited, information-savvy “digital native” simply did not in fact exist.

Teachers did not create the delusions of digital competence that school decision makers use to justify their decisions to skimp on EdTech training. Teachers aren’t neglecting to hire integrationists. Teachers don’t have control over which EdTech platforms and services are brought in. If anyone, school leadership should be held responsible for the limited success of EdTech in a school. Otherwise, what does leadership even mean?

Everyone has a role to play in closing the gap between the results of Trickledown EdTechenomics and transformations of the kind being detailed in the EdTecho-chamber, and there are distinct steps a community must take to maximize their EdTech investment.

The conventional wisdom of Trickledown makes little distinction between EdTech implementation and integration; they are naively treated as one in the same. It’s why most school administrators don’t think they need to invest in technology integration coaches and trainers or set aside time for consistent professional development in EdTech.

Kabuki Integration is what I call the common result of a non-technically-oriented leadership imitating the steps they see others taking with EdTech while failing to grasp the core principles of tech transformation. Their failure to shift their mindsets, leadership styles, and the school culture to fit the digital paradigm means there is no focus on the actual value being delivered, so programs end up being controversial or burdensome.

Worse is that “Kubuki Integration” is maddeningly unaccountable, because it gives the appearance of “working.” Without user needs as a focus, EdTech often resembles a kind of high-concept performance art; the appearance of learning. It’s show versus functionality, substitution over transformation; thus the name, “Kabuki integration.”

“Organizations which design systems are constrained to produce designs which are copies of the communication structures of those organizations.”
Mel Conway, 1968

Any time you hope to integrate something as paradigm-shifting as “EdTech,” you need to send strong signals to establish new norms. Conway’s law describes the challenges you’ll face in doing this, as most often, an organization’s structure mirrors the internal concerns of the organization rather than the needs of its users.

Without school leaders who truly understand technology integration principles, EdTech can end up as a compliance regime of IT department acceptable use policy, not an EdTech program aimed toward maximizing student learning. Someone has to be thinking of the entire digital ecosystem and how each bit of it affects the community.

IT departments can be left alone to decide on how best to manage a large number of machines, but they must be directed and lead in how to proactively investigate the boundaries between systems and devices, looking at the ways and reasons why users are wasting time expending unnecessary effort because the systems haven’t been designed nor devices set up with the user in mind.

All teachers know from working with students that the most effective teaching and learning resources are most often high-touch, not high-tech, and EdTech has the potential to offer both.

Matt Brady is Director of Digital Learning at Nishimachi International School in Japan.