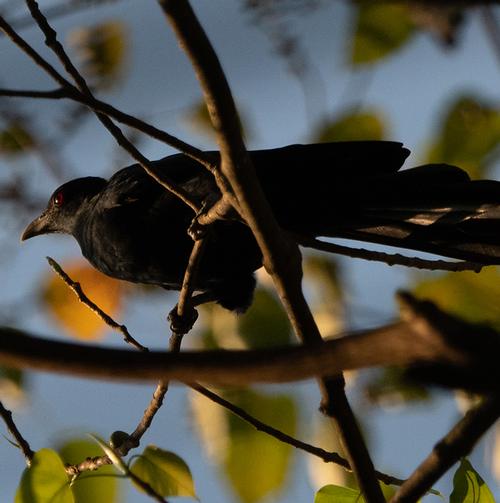 Photo of the Asian Koel by Gavin Ailes.

“Adopt the pace of nature. Her secret is patience.”

These are uncertain days here in Yangon. Yet each morning we still awake to the sounds of the Asian Koel, a member of the cuckoo family found throughout Southeast Asia. It took me a while to identify this particular avian. There’s no way not to notice its distinctive call—it can be heard everywhere, especially during the non-rainy season, which spans more than six months of the year here in the low-lying river delta region of Myanmar.

More than a year after moving back to Myanmar (we lived here previously, from 2011–2013), this bird’s call offers no longer just a soundbite but a soundtrack to our lives. However, the Asian koel is an elusive creature—or, so it appeared. The problem is that the male closely resembles a crow, and crows are everywhere. So when I looked up to the treetops, I could see a black bird tucked into the foliage, but its features were impossible to make out.

“Must be a crow,” I thought to myself, still wondering what bird was actually cooing.

It was exactly a year ago we were at the beginning stages of COVID-19, wondering whether we’d make it through the school year teaching our students in person or not. We had some experience with doing virtual learning at our previous school in Saudi Arabia, but usually our shift to remote was prompted by the weather (wind, rain, sandstorms), and these periods never lasted longer than a couple of days, at most.

It was the middle of March when we were told by our director that we were going completely virtual. The initial thought was it would last several weeks, but it was possible we could be back teaching in person by the end of the school year. Quickly it became clear this would not be the case. All of a sudden, it was trial by Seesaw, Google Slides, and Screencastify. Everyone—students, parents, and teachers—had to adapt and adjust almost on a daily basis. It felt like the longest school year of my twenty years in education.

Fast forward a few months and as we commenced the 2020-21 school year, we had a surge of COVID-19 cases. The possibility of teaching in person was put on hold, and we adjusted yet again, conducting our new classes via Zoom. Once again, the hope was this would last a few weeks, or a month. It has now been many months.

Despite all of this upset, I had a sense of optimism going into 2021. We had some nice staycations at various hotels in Yangon. We went swimming as a family at the American Club. It seemed more and more families were coming back to Yangon. There was still a nationwide stay-at-home order throughout Myanmar, but cases of the virus were slowly going down, more people were out and about (though some were not wearing masks!), and even some restaurants allowed for dining-in. The school also allowed for small groups of students and parents to come use the facilities to exercise, study, and to play, which brought the campus back to life. Things were looking bright.

On 1 February 2021, everyone woke up to the news that Myanmar was in the throes of a military coup. While I won’t comment much more about the current situation, it certainly has brought further uncertainty to everyone’s lives.

At times it has felt like a grain of sand could topple the tower of emotions climbing ever higher in the skies overhead. Uncertainty breeds further uncertainty. Wondering what might come next is about as useful as throwing a dart at a blackhole.

The other day during a staff professional development meeting, a panel of students were discussing the topic of inclusion. As one of the students shared her thoughts, I could hear the call of the Asian Koel in the background coming through my computer’s speaker. Per-weer, Perweeeeer!

Once again, while I could not see the bird making that sound, I still knew it.

“There it is—that bird, again,” I thought to myself, its call grounding me.

That familiar sound of nature was enough to gently remind me that, right now, in this moment, things were alright.

03/10/2021 - TWINKY
I HAD NOT WALKED IN YOUR SHOES, BUT NOW FEEL AN
INTIMATE CONNECTION TO YOU
AND YOUR HIGHLY DIFFICULT
GROUPING OF TOTALLY UNEXPECTED CIRCUMSTANCES.
YOU DIRECTING YOUR ATTENTION TO THAT WHICH GIVES YOU PEACE GIVES THE MOST INTIMATE UNDERSTANDING OF THE FINEST MANKIND CAN BE.
WHAT A MAN! WHAT AN AUTHOR!

03/09/2021 - FattyMcFatface
Nice article Wyatt, miss you here in the sandbox. Living by the sea now brings a whole new set of birds to our area. Love sitting outside in the morning listening to the song birds. 03/08/2021 - Tom
HI there,

Thanks for this. I also teach here in Yangon at Thalun International School. I love the sound of the Koel, it was the first bird I became familiar with when I moved to southeast Asia almost 17 years ago now. That was in Singapore. After Singapore, I went to Indonesia for several years, and where I was there we did not have any koels. However, when I came to Yangon almost 3 years ago I heard it again in the early morning from my apartment. It also brought to me a comforting sense of familiarity and happy memories. I used to spend a lot of time at People's park before it was closed this past December, and there I heard the koel often when I did my afternoon exercise in the park. I always thought of it as the bird I can hear but cannot see. These are difficult times here, as you mentioned. Most difficult is the great uncertainty that hangs over us. We hope for the best, and pray for the people of Myanmar that their greatest hopes of freedom and living in a democratic land come true.

Strategic Policy: A Missing Link in International School Governance
By Chip Barder May 2022