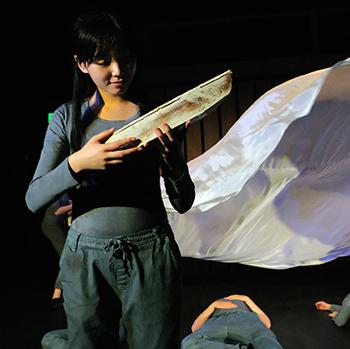 Imagine your home. Think of the five things—or people—that you most cherish there. Now, imagine being forced to abandon them all. Such is the reality of the world’s 70.8 million displaced people, more than the entire population of the United Kingdom.

In May 2019, Electric Voices, an immersive, site-specific play performed at the French-American International School of San Francisco, delved into such imaginings, inviting performers and audience members to forge an empathetic relationship with refugees.
The May performances were the culmination of a six-month process in which students worked alongside local artists, drawing together documentary material and poetic texts, physical improvisation, and overseas travels to create this original work about the refugee experience.

The inspiration for Electric Voices came in the summer of 2018 when my co-director, Marie Walburg-Plouviez, and I were brainstorming themes for an experimental theater project to complete our school’s 2018–19 performing arts season. We had both been shaken by images of the MS Aquarius, a ship jammed with 600 refugees that was refused entry into one European port after another. At the same time, heated debates about our own country’s treatment of immigrants and asylum-seekers had become front-page news. Our starting point became clear: the experiences of refugees, near and far, today and through the ages.

In September, we recruited a team of twelve student-artists, game to take on the project’s theme and exploratory process. We also reached out to a local theater artist, Tom Bentley-Fisher, artistic director of the Yat/Bentley Center. He joined us as a key collaborator, bringing to the project his own artistry, together with the creative energies of his professional acting students.

The hands-on work began in January 2019 with a period of immersive research. Our students first gathered stories of immigration and exile from family, friends, teachers, and neighbors. One shared how her own parents had fled the Soviet Union, leaving everything behind. Another confided her own uncertain status, as a student from overseas, hoping her own family might one day settle in the U.S. They heard from community members whose families had fled Eastern Europe, North Africa, and Southeast Asia. They learned how one beloved teacher, a pillar in our school community, had first come to the United States as a refugee, fleeing the threat of torture and imprisonment after Chile’s 1973 military coup.

The creative team then expanded the scope of its research, turning to films, articles, essays, and interviews with refugees in San Francisco and beyond. Inspiration also came from artistic sources: plays, poetry, and photography by or about refugees. These became starting points for group improvisations, original scenes, monologues, and installations that would shape the final project.

An integral part of the project’s research came in March during a two-week school trip to Cambodia and Vietnam, dedicated to exploring the legacy of war and genocide in those countries. As the trip’s faculty organizer and lead chaperone, I had crafted the trip’s itinerary with Electric Voices in mind. Three of the student-artists—Zola, Casey, and Matthew—traveled with me overseas, gathering additional images, documents, and experiences for the collaborative project.

The trip included several nights in a rural Cambodian village, where students interviewed village elders about their experiences during the genocide. Zola shared how these interviews brought the terrifying mechanics of genocide into relief. Villagers described being separated from family members and forced to move to distant villages. They spoke of summary executions and brutal punishments. She learned how, even in a tight-knit rural community, genocide could happen when a government seeded “fear and confusion, restricting communication to the outside world so the citizens wouldn’t know what was going on or be able to get help.” Later, in our final performance, testimonials from survivors of the Cambodian genocide would be juxtaposed with those from other instances of war and terror.

The trip also embraced visits to the S21 Prison and the Killing Fields in Cambodia and to the Cu Chi Tunnels and the War Remnants Museum in Vietnam. These brought visceral understanding of the forces driving refugees into flight. Casey reflected, “After coming back from the intense, moving trip to Vietnam and Cambodia, Electric Voices all came together for me. One can never begin to understand the refugee experience without first understanding what would force someone to leave their home. Learning about the horrors and tragedies of the Vietnam War and the Cambodian genocide gave me that insight, and I was able to put all of that emotion into the work.”

Justin reflected that traveling overseas also transformed his onstage work. He observed that, although in our early research we had interviewed Vietnamese-Americans who had found refuge in the U.S., the trip made clear the “absolute gravity and lack of responsibility [of the U.S.] for actions taken in that area of Southeast Asia.” He reflected, “Being able to take this into consideration while onstage and also representing this dichotomy between the hope and potential terrors of a new life elsewhere allowed me to better portray the troubling ambiguity of refugee life.”

The culminating performances drew audience members into an immersive space with 25 performers—half from our school and half from the Yat/Bentley Center. Upon entering the Pavilion at the ground level, “guards” dressed in camouflage separated audience members from their friends and family. With brusque orders, they herded small groups down into the basement’s darkened hallways, alcoves, and classrooms. Here, installations and short performances focused on the forces propelling refugees to flee. Texts from Aeschylus, Shakespeare, and Brecht were juxtaposed with modern-day texts. Images plastered the walls. Abandoned suitcases littered the hallways.

After this initial, immersive experience, audience members were led upstairs to the Pavilion’s third-floor black box theater, where they found a more familiar set-up: i.e., seating and a stage. Here, we used more traditional stagecraft to evoke the experiences of the refugees themselves. These were the “lucky ones” who had managed to flee war, genocide, instability and terror, yet who now faced unknown lands and open seas, border crossings and migrant camps, uncertain futures in new lands where they may be seen as outsiders, starting anew with nothing.

This section began with a movement piece inspired by local refugee, Lauren Vuong, who had shared with us her memories of being a seven-year-old girl on a rickety boat adrift in the South China Sea. Other sequences integrated texts from renowned refugees, including Nobel Prize winner Alexander Solzhenitsyn and Pulitzer Prize winner Viet Thanh Nguyen.

Nguyen’s exhortation that writers are duty-bound to, “conjure up the lives of others” as “only through such acts of memory, imagination, and empathy can we grow our capacity to feel for others,” was one of many beacons in the creative process. Indeed, our artistic team’s efforts to immerse ourselves in refugees’ stories and “conjure” these voices for our own community made us appreciate how much the determination and desperation, the hope and solitude, the loss and longing threaded through refugees’ experiences could so easily be our own.

I am grateful the project was a “success” by many traditional measures—the students’ pleasure in performance, for example, or the audience’s appreciation and applause. However, it was especially successful in the richness of post-show conversations, the expansive community in attendance, and the students’ sense of purposefulness in giving voice to the untold stories of others.

This project reminded me that, in an international school setting, an original collaborative theater project offers a potent frame for revealing the voices in our immediate community, galvanizing local partnerships, and activating international travel to new purpose. It reminded me that the origin of “theater” is the Greek word theatron, meaning “the seeing place.”
Indeed, theater offers a unique form and forum in which to “see” ourselves more expansively, to “see” the other, and to bring to light those issues most in need of visibility, within and beyond our school communities.

Michelle Haner teaches IB Theater and serves as the Artistic Director of Back à Dos (the after-school performing arts program) at the French-American International School of San Francisco. She is also the school-wide Urban Engagement Coordinator, leading an internship program, speaker series, and key partnerships.

10/08/2019 - Mr Stick
I attended this performance and I was truly moved. Not only by the performance but also for the idea that theatre can be a beautiful and an important means for communication. How we get our news and how we feel about it and what we do about it are vital elements of our culture today. Ms Haner has lead a troupe of brave artists who seem to understand and hold sacred the ways we tell each other what is going on. I wish I had had her as a teacher when I was in high school; I'm sure I would have fallen in love. Bravo French American, Bravo Michelle Haner.