There's a new addiction on campus: Problematic Internet Use (PIU) 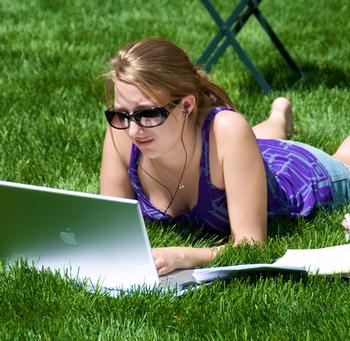 Problematic Internet Use is now considered to be a behavioral addiction with characteristics that are similar to substance use disorders.

Individuals with PIU may have difficulty reducing their Internet use, may be preoccupied with the Internet or may lie to conceal their use.

Our study is the first to look at how PIU affects family relationships among U.S. university students. Intriguingly, we found that college students with PIU report effects that are both negative and positive.

Measuring PIU and its problems

To better understand PIU, we focused on students whose Internet use was excessive and created problems in their lives.

Study participants were undergraduate or graduate students enrolled at UNC Chapel Hill. We required that participants be individuals who were spending more than 25 hours a week on the Internet (time that was not related to school or work). Additionally, participants had to report experiencing at least one health, relationship or emotional problem due to PIU.

To recruit our participants, our team sent out an email on a Friday evening. We were not sure if this would be a good time to reach students, but we were surprised that within two hours, 39 students responded. Of those who responded to our email, 27 students attended our four focus groups and completed our questionnaires.

Roughly half (48.1 percent) of our participants were considered “Internet addicts.” These participants answered “yes” to five or more of our eight questions (e.g., preoccupation; inability to control use; lying about use; depressed or moody when trying to stop).

Another 40.7% were considered to be “potential Internet addicts.” These participants answered “yes” to three or four items. All of the participants met the criteria for PIU using the Compulsive Internet Use Scale, a 14-item scale that included items like difficulty stopping; sleep deprivation; neglect obligations; feelings of restlessness, frustration or irritation when Internet is unavailable.

We used focus groups, which are group conversations guided by a facilitator, to discuss shared experiences or knowledge regarding PIU. Each focus group had six to eight participants.

Here is what we found

We had examples of positive connections. Some participants reported that the Internet connected them to their families. For example, participants discussed using Skype, Facebook or email to maintain relationships with family while they were away at college.

A student we call Hannah explained:

But like using Skype helps keep you connected and also when we are at home we watch a movie together, it’s like family time, you know. And um, like you know, if we read the same, like article, then we can talk about it on Skype.

I hate talking on the phone. So, that allows me a way to stay connected and especially with my mom who would… Normally, I would just not respond to her at all, but now we have an email dialogue going. That helps us stay more connected.

For these participants, Internet use caused family relationships to disconnect or become conflicted.

Instead of interacting with their family when they were at home, participants reported that they were “on the computer the whole time.” One participant described ignoring her family during her visits home as a result of her Internet use:

I think for me, this year I went home and one of the reasons was just was to have more family time, but what I ended up really doing was staying on my computer pretty much the whole time, which was kind of defeating the purpose of actually going home.

Steve described how his Internet use affected a visit with his brother and his friends at a sports bar:

At one point we’re all watching the basketball game, and all four because we’re all on our phone, and he looked at us and he said, ‘Really guys, I am here for two days, you all just wanna [sic] be on Twitter and Facebook?’ So, while it can enhance with setting up social situations, it can also detract from them once you were actually in them…Yeah, he was very just like…He flew out for the weekend. You know he spent US$300 on an airplane ticket just to sit there and watch me on Facebook.

It’s not just the students

It may not be surprising that college students with PIU reported that members of their families also overuse the Internet.

Some participants expressed frustration at the lack of boundaries or rules in place for their younger siblings or other relatives. A participant we called Melissa shared about her little brother:

He just turned four, but they got him an iPad. Like, which I don’t agree with. I think it’s so stupid, but he is always, always on it. He gets really defensive if you try to take it away or put boundaries on it or something like that.

Hannah, for example, described a cousin whose Internet gaming has impaired his vision, but he is unable to stop playing:

My cousin, he is addicted to video games. And he’s like, I think he is like 10, 12, something like that, I don’t remember. I feel like it’s a stupid game, there’s no deepness to it. You kill someone. They die. You get killed, it starts over again. He can play that for eight hours straight without moving. His eyes are really bad right now. He can’t control himself.

Sarah likened her Internet use to her mother’s:

My mom talks about me using the phone at the table when we’re eating, cause like if there’s a break in conversation, ‘Oh, Facebook opportunity’ [others laughed and she laughed too]. And then, like, somehow in my mind [the] conversation is over, but it’s really not. So then she’s like ‘You’re always on your phone, what are you doing?’ But then, like two minutes later, she is checking the weather. So I don’t know [she laughed].

A few participants shared that they were the only ones in their family with PIU.

Cindy explained that her family was from another country, which may explain their low Internet use,

I find that I don’t really have family members with an Internet problem, and I am the only one who grew up here. So, that might be…

My parents are technophobes. They don’t even know how to turn on computers.

Although our sample size is small, we followed rigorous approaches to ensure that we obtained the best possible data. We conducted focus groups until we achieved data saturation, which means that when we reviewed the final focus group no new themes were discovered.

The conclusions come through loud and clear. PIU exists and it affects family relationships. While those effects may be both positive and negative, those who suffer adverse consequences from PIU may have difficulty addressing their PIU because of requirements to use Internet for classes via online assignments (e.g., writing blogs), online courses and materials accessed online.

All names have been changed to protect identity.